A major International Symposium highlighting a growing crisis in Irish Higher Education was held in Dublin on Monday, September, 29th. The symposium, 21st Century Universities: Performance and Sustainability, which was organised by the Irish Universities Association, brought together respected experts from across the globe in order to review the performance and regulatory challenges facing the third level sector and, most importantly, strategies to overcome the current crisis in funding sustainability. The Minister for Education and Skills, Jan O’Sullivan TD also gave her first public address to the sector at the symposium.

An increase in Ireland’s population, combined with increased participation rates at third level, has seen consistently growing student numbers entering higher education institutions. However, the sector faces a range of challenges. There has been a decline in income per student of 22% from 2008-2014, coupled with increased class sizes.  In addition, there has been virtually no new state investment in capital infrastructure in Irish universities and colleges since 2008, and 40% of the system’s infrastructure is now below standard according to the Higher Education Authority. There has also been an overall decrease in exchequer funding of all higher education institutions by 32% in the past six years from €1,393.2m to €938.9m.

Speaking on the aim and significance of the symposium, the Chair of the IUA, and Provost of Trinity College, Dr Patrick Prendergast said: “Successful countries have high quality higher education systems, and all high-functioning knowledge economies have universities of global reputation. We want to look at the issues of competitiveness, performance, regulation, governance and financing of higher education institutions. We want to understand Ireland’s position on these issues in comparison to other countries and we want our thinking about future sustainability to be informed by best international practice.” (Complete text of the Provost’s speech can be found here). 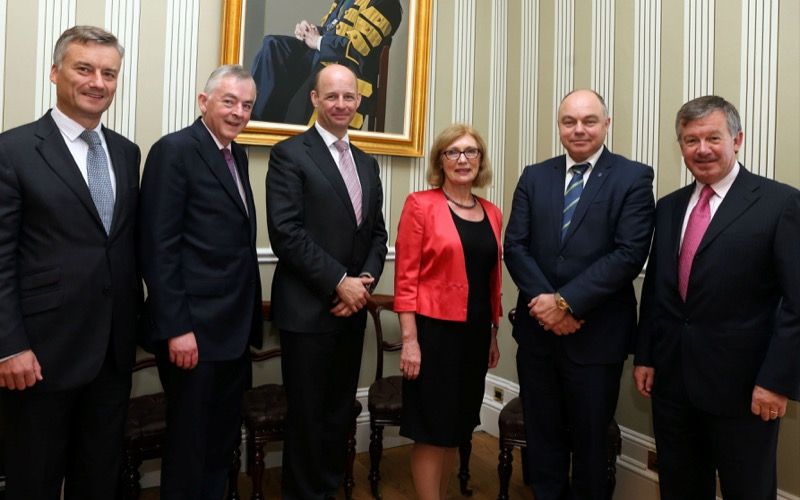 The symposium was attended by representatives across all higher education institutions and the education sector as well as  industry, Government and local authorities among other key sectors.

US Education public policy adviser, Art Hauptman, addressed the issues of funding sustainability:  “Sustainability cannot be accomplished by maintaining existing policies that place almost total dependence on the public sector to fund rapidly growing demand for higher education. The biggest issue facing Irish higher education is not the level of national investment but the mix of public and private funding.”  Mr Hauptman added: “The key then for achieving sustainable policies in the future is for Ireland to increase its level of private investment while maintaining public investment levels in higher education. This can be done in several ways that don’t require extraordinary sacrifice from parents and students, including a broad reconsideration of the fee and support schemes that would rely on private funds to pay for future growth in the system.”

Professor Stephanie Fahey of Ernst and Young, Australia, presented a view of a future in which higher education institutions have to change radically to cope with globalisation of competition and the digital revolution. She said: “While the HEA System Performance Report explicitly recognises the need for Irish Universities to be globally competitive, it is less clear to an external observer how this will be funded and how this can be delivered in an environment where student numbers and staff/student ratios are both on the rise.”

US education systems management expert, Aims McGuinness, reviewed trends in governance in Ireland and the US and made a number of recommendations for change. He called for a much stronger link between national goals and investment in higher education. He said that: “The lesson learned from both countries is that top-down mandates and regulation have a limited ­- if not negative impact – on fundamental change within academic institutions.”

OECD Policy Analyst, Patricia Mangeol, presented the findings of the 'OECD Survey of Education' and looked at the performance of Ireland relative to other OECD countries. Some key findings included the exceptionally high returns to both the individual and the state from third level education. This contrasted with the decline in investment by government – which is particularly striking in light of the growing demand for higher education and rising student numbers.

A consistent theme running through the speakers’ presentations was the need to ensure that government regulation and institutional governance systems support university competitiveness and performance, rather than hinder it. European University Association governance expert, Thomas Estermann, said that university autonomy improved quality and efficiency. However, when comparing Ireland to other European countries he found that: “Ireland scores well in terms of academic freedom, but it is let down by a number of restrictions, especially on institutions’ freedom to manage their human resources. The particular worry is that our latest analysis shows that the balance of autonomy and central control is tilting in the wrong direction.”

Other presentations at the symposium included business leader, Gerry Collins, who spoke about the pharmaceutical industry and its relationship with higher education, and Ms Liesl Elder, Director of Development at Oxford University, who talked about the potential of philanthropy to support higher education sustainability.

IUA CEO, Ned Costello, said: “We are privileged to have the opportunity to bring together such a broadly based group of international experts. It is clear from their analysis that the pressures on higher education in terms of funding and regulation are not unique to Ireland. However, the symposium will also make clear the scale of the challenge facing us and the need for urgent action. As national recovery begins to take hold, there is too much at stake to jeopardise our future through complacency or prevarication.”