In the past ten years, nanoscience has grown such that it is now linked to 10% or €15 billion of Ireland’s annual exports, and is responsible for over 250,000 jobs. CRANN has grown from just 6 researchers to over 300, from working with 4 companies to over 100 and has leveraged State funding to bring in over €50M of non-Exchequer investment from industry and international funding streams.

To mark the occasion CRANN unveiled the world’s smallest birthday cake and a video of its making. At 500 nanometres in height, the ‘cake’ is 2000 times smaller than a grain of salt.

Speaking at the event, Commissioner Geoghegan Quinn said: “The European Commission has prioritised nanoscience research directing €1 billion of funding through the Graphene Flagship. CRANN is involved in that project and with a track record of working with industry, is recognised as using excellent research for commercial impact. That link between industry and academia is a model which we aim to replicate across Europe, to ensure that the economic return of research is fully realised.”

Minister Fergus O’Dowd said: “Nanoscience is a crucial industry in Ireland, and is critical for supporting manufacturing and research for 90% of the world’s medical multinationals and 70% of technology multinationals based in Ireland.”

Minister O’Dowd added: “Leading research centres of excellence such as CRANN have helped to transform Ireland’s research landscape and higher education connectivity with industry since the early 2000s. With top-class researchers like those working in CRANN, Ireland is regarded as one of the leading countries for nanoscience innovation in the world.”

The Minister concluded by saying “Centres of its scale and excellence are a key part of the Government’s plans for jobs and growth. We need to continue to develop good ideas through quality scientific research and ensure that we turn more of them into good sustainable jobs, new products and services”. 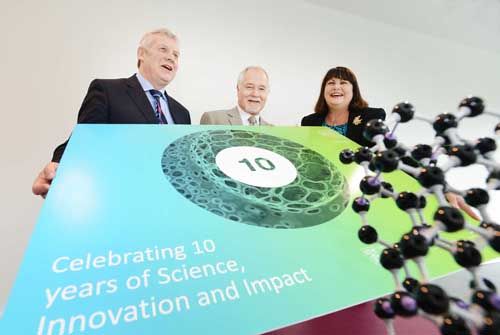 Professor John Boland, Director of CRANN said: “The past decade has been an exciting growth period for CRANN. We employ over 300 researchers, work with more than 100 companies in Ireland and internationally, have won €50M of non-Exchequer funding and filed almost 50 patent applications. Ireland is now ranked 6th for nanoscience and 8th for materials science internationally. We are also attracting researchers from other universities to Ireland’s shores, as well as developing indigenous research talent. In the next decade, nanoscience in Ireland will lead on the international stage”

At the event, CRANN was also joined by some of its industry partners including Henkel, DePuy and Intel. Eamonn Sinnott, General Manager of Intel Ireland said, “Intel is working with CRANN in the field of nanoscience to look for new ways to continue the miniaturisation of our computing technology. Our partnership began in 2003 and has delivered significant mutual benefit. We look forward to another successful decade of leading-edge research and technology innovation.”

Dr Patrick Prendergast, Provost of Trinity College said:  “I’d like to congratulate CRANN on their 10th anniversary. The institute was Trinity’s first research institute and its establishment has impacted hugely on the college’s reputation for internationally leading research. This research excellence has had a significant effect on both undergraduate and postgraduate education in Trinity.”

To celebrate its anniversary and bring nanoscience to the public, CRANN will host a series of public events throughout the year:

– CRANN’s Ten Talks will take place in the Science Gallery during Science Week in November 2013. Free to the public, it will consist of ten very short talks on a number of topics including an introduction to nanoscience, graphene – the next wonder material, nanomaterials and vaccines as well as nanomedicine, smarter diagnostics and treatments.

– CRANN’s Ten Tours: CRANN will launch a schools’ competition during Nanoweek 2013 (14th – 21st June) which will see ten schools from around the country win a tour of CRANN and the Science Gallery for one of their classes. Students will be asked to write in 500 words what they would look forward to seeing if they got a chance to visit a nanoscience institute and why they think their class deserves a tour. Entries will be accepted from individual students or a group entry from a class. Two secondary schools from each province will be chosen with two runners-up from any province giving ten schools in total.

The institute has also developed an infographic, From Small to Mighty which shows the rise of nanoscience in Ireland and globally in the past decade.