Taoiseach, Bertie Ahern TD, said on the occasion of the opening: “I am delighted to have been asked to officially open the Naughton Institute at Trinity College. This is a state-of-the-art facility. It will house Ireland’s first purpose-built nanoscience research institute, the Centre for Research on Adaptive Nanostructures and Nanodevices. The Government has made a substantial funding commitment to nanoscience research through Science Foundation Ireland (SFI) among others. Our overall aim is to translate the considerable National Development Plan investment in this area into a tangible return, in terms of quality jobs, knowledge output and Irish competitiveness.”

Commenting on the significance of the nanoscience research institute for Ireland, TCD Provost, Dr John Hegarty said: “Nanoscience has the potential to change our lives in unforeseeable ways in the coming decades. Imagine being able to diagnose up to 20 cancers through one finger prick of blood through ‘lab on a chip’ nanotechnology. Or powering entire cities with wind or solar energy thanks to carbon nanotube electrical conductors. Or through refined chemotherapy, targeting only cancer cells and not large sections of your body. These are all possible through nanoscience which is the study of nanoscale objects less than 100 nanometres – a nanometre is one million times smaller than a millimetre. New technologies emerging from nanoscience are set to yield the next generation of microelectronics, drug delivery systems, medical imaging techniques among many other areas”.

“Trinity’s CRANN is an internationally leading nanoscience research institute committed to delivering world-class science research at the forefront of industry and innovation. Ireland is ranked 6th globally for the impact of its nanoscience research. There is now a real opportunity for CRANN to lead Ireland’s activity and play a key role in these developments by linking world class university research with the challenges faced by industry “.

In relation to the Science Gallery, the Provost, Dr John Hegarty, added: “Through our Creativity in the Community programme, Trinity College is committed to engaging the public and in particular young people with the activities of the university and of science. This takes a significant step forward through the delivery of the Naughton Institute and the new Science Gallery – the first phase of our Pearse Corridor Development. The Science Gallery is a flagship national initiative which will probe major scientific issues through a programme of innovative and interactive exhibitions, workshops, events and debate. As a vibrant new public science cultural centre, celebrating science, and technology, it will focus on connecting with the 15-25 age group, firing up these young people to develop a passion for science. “

The Science Gallery will open next week (February 2) with LIGHTWAVE – a spectacular 9-day festival which will explore light in science, technology and art. Featuring among others an installation by U2’s lighting designer, Willie Williams, LIGHTWAVE will also include an exciting range of events and workshops by world renowned scientists, artists and engineers.

The Naughton Institute is a state-of-the-art facility comprising five storeys over basement. Wilson Architects, specialists in nanoscience research buildings, in conjunction with RKD designed environmentally controlled, vibration-free laboratories for the specific purpose of the study of nanoparticles. The building has been named the Naughton Institute in recognition of the generous support provided by Dr Martin Naughton, Chairman of the Glen Dimplex Group. Other funding bodies which have contributed to the building include SFI, the Department of Enterprise, Trade and Employment among others.

SFI in particular, has invested a total of €74 million which includes capital funding as part of its commitment to nanoscience research in CRANN. This includes funding for the original Centre for Science, Engineering & Technology (CSET) award and a significant number of Principal Investigator awards to researchers based in CRANN, all of whom have been assessed under the international peer review system operated by SFI.

Trinity’s researchers in CRANN are developing groundbreaking research which has the potential of enabling revolutionary development in both the information and communication technology and health care sectors. It is providing solutions which will drive the miniaturisation of existing technologies resulting in more powerful and multifunctional mobile electronics. Applied to health, nanoscience research in CRANN has the potential of radically improving patient care through the development of improved diagnostics for cancer and disease. Approximately 150 researchers, postgraduates and technicians are currently working at CRANN.

Trinity College’s nanoscience activities in CRANN are supported by Science Foundation Ireland and the Higher Education Authority, in partnership with Intel and Hewlett-Packard. €100m has been invested in this research area to date in programmes and infrastructure with CRANN most recently coordinating the national PRTLI4 NANOTEIRE programme, a consortium of eight Irish Higher Education Institutes involved in nanoscience.

Trinity College’s Science Gallery is supported by both public and private funding. Significant capital support was provided by the Department of Enterprise, Trade and Employment. Ulster Bank is the Gallery’s founding corporate partner and through the ‘Science Circle’ corporate support has also been provided by DELL, Google, ICON, PACCAR and Wyeth.

Notes to the Editor:
About CRANN at TCD
The Centre for Research on Adaptive Nanostructures and Nanodevices (CRANN) is the centre for excellence for nanoscience in Ireland which is headed up by director, Professor John Boland and executive director, Dr Diarmuid O’Brien. CRANN builds on the research expertise in the Schools of Physics and Chemistry at Trinity College Dublin and the Schools of Chemistry at UCC. Since its foundation in 2003, its leading research experts (Principal Investigators) have more than tripled to 16, with many recruited internationally. The post-doctoral and postgraduate population now exceeds 140. CRANN has developed important industrial partnerships with Intel and Hewlett-Packard and there are currently ten industry researchers- in-residence working within the Institute, with over 50 researchers directly involved in collaboration with these companies. CRANN has three research areas:Spin electronics and sensors; Integrate nanoscale devices and BioNanoAssay and sensing.

CRANN has a strong educational and societal focus. It is leading a national initiative to establish a fourth level postgraduate training programme. The nanoscience institute was also the driving force behind the establishment of the Science Gallery. It has an active outreach programme bringing educational nanoscience activities to schools and the community and welcoming students at all stages of their development for placements.

About the Science Gallery
The Science Gallery is headed up by director, Dr Michael John Gorman. This brand new public space will be a place ‘where ideas meet’ capturing the imagination of the public and in particular young adults and offering opportunities for genuine participation and social connection in science and technology. The Science Gallery will target an audience of 15-25 year olds through a dynamic programme of exhibitions, public experiments, festivals, debates and workshops in addition to a unique outreach programme to secondary schools. The Science Gallery is a direct response to Ireland’s challenge of a continued fall in the numbers of students taking science subjects at university level. It aims to address this problem by highlighting the opportunities for creativity, imagination and global change provided by science and technology in 21st century society. The Gallery will open in February, 2008 with LIGHTWAVE, its first exhibition. LIGHTWAVE will explore controlling light in science, technology and art and is sponsored by Discover Science and Engineering. 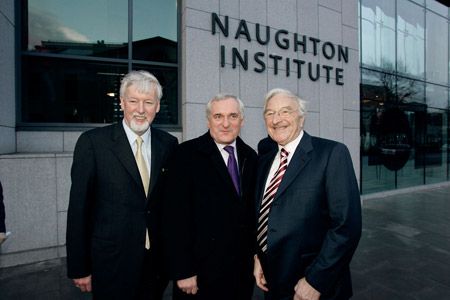