One thousand years of musical treasures from Trinity College Dublin’s music collection are featured in a new exhibition in Trinity College Library, which opened to the public recently.

Entitled In Tune: A Millennium of Music in Trinity College Library, the exhibition features significant treasures from the library’s music collection, which has been built up over the course of four centuries. The largest music library in the country comprising over 150,000  items, Trinity’s music collection reflects a thousand years of Irish and European musical history comprising a broad spectrum of manuscript and printed music, including medieval plainchant, music from Georgian Dublin, Irish folk music collections, and 20th-century music from leading Irish composers to popular songs.

In Tune, which is sponsored by KBC Bank, also celebrates the 250th anniversary of Trinity’s Chair of Music, first held in July 1764 by the Earl of Mornington. Successive Professors of Music have contributed to the musical life of the country through their teaching, composition, and performance activities. The exhibition will run until April 2014.

Visitors to the exhibition will be able to hear some of the music featured in the exhibition as they browse the display cases in the atmospheric Long Room, which is home to 200,000 of the Library’s oldest books. This is the first time that background music has featured as part of an exhibition in the Long Room. 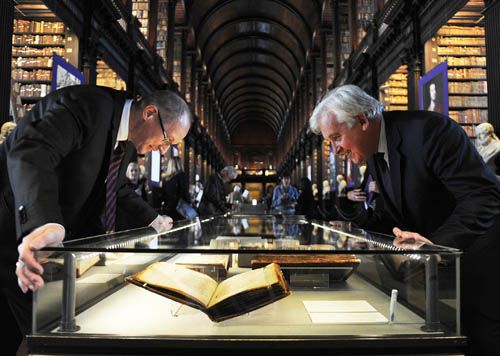 Pictured at the launch of the In Tune exhibition were Trinity’s Music Librarian Roy Stanley and John Reynolds, Chief Executive, KBC Bank Ireland. 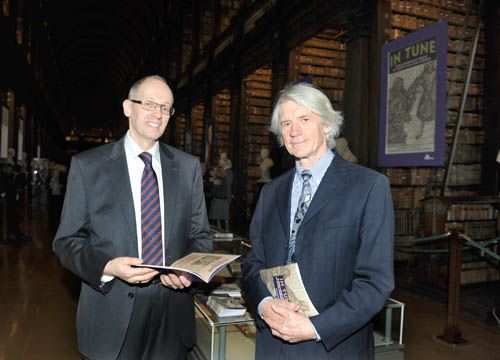 Pictured at the launch of the In Tune exhibition were Trinity’s Music Librarian Roy Stanley and Professor Barra Boydell, who launched the exhibition.

o   Erfurt Enchiridion, the only known surviving copy of the earliest published collection of Lutheran hymns published in 1524;

o   The earliest copy of the Londonderry Air as first transcribed by George Petrie, 1853

Speaking at the exhibition launch Roy Stanley, Music Librarian at Trinity College, commented: “This exhibition presents a rare opportunity to highlight the wide range of musical treasures held in the care of Trinity College Library, many of them unique or extremely rare. The exhibition captures Irish and European musical achievement through the centuries. Visitors will be enthralled by the variety of the exhibits, the fascinating stories behind them, and their particular significance in musical and cultural history.”

In Tune: A Millennium of Music in Trinity College Library was launched on Thursday, October 17th, 2013 in the Long Room, Old Library, Trinity College by Professor Barra Boydell, editor (with Harry White) of the recently published Encyclopedia of Music in Ireland.

Professor Boydell commented: “This impressive exhibition, reflecting the breadth and historical significance of the music collection held by the library of Trinity College Dublin, is a ‘must’ for anyone interested in music in Ireland. It emphasises the range of musical activity in Ireland over many centuries, including the significant contribution of composers and collectors associated directly with Trinity College.”

John Reynolds, Chief Executive, KBC Bank Ireland added: “We are delighted to sponsor the In Tune exhibition at Trinity College, a remarkable collection of some of Ireland’s oldest and most prestigious music manuscripts and artefacts.  Throughout our 40 years in Ireland, KBC has been committed to supporting innovative cultural and artistic events and In Tune is an inspirational initiative which reveals further Ireland’s rich musical heritage in the beautiful setting of Trinity’s Long Room.”

A series of lectures and concerts to accompany the exhibition will be held over the next five months starting with a lecture-recital entitled Tunes of the Munster Pipers: Irish Traditional Music from the James Goodman Manuscripts at Trinity College Dublin by Nicholas Carolan, Director of the Irish Traditional Music Archive and uilleann piper Peter Browne on Wednesday, November 20th, 2013, 6.30pm.

Fiona Tyrrell, Press Officer for the Faculty of Arts, Humanities and Social Sciences, Trinity College Dublin at tyrrellf@tcd.ie or tel: + 353 1 8964337.