For those inclined, it’s the season for a cold, refreshing gin and tonic. We may question the health impact of one too many, but what is the environmental footprint of that classic aperitif?

An international team of researchers teamed up with a pioneering distillery manager to answer this very question in a study recently published in the scientific journalEnvironment International.

What they discovered may lead to a new method for producing gin and other alcoholic drinks, as well as creating greener biofuels. Their findings may even do their bit in the fight to save the world’s rainforests.

The footprint of gin production

Lead author of the study, Theophile Lienhardt, puts this into context. He said: “In terms of climate change impact, sipping a large measure of gin is similar to consuming a small serving (150 ml) of milk, or to driving one km in a petrol car.”

But what if that gin was made from peas? Working with the team of researchers, experts at Arbikie Distillery in Scotland have run trials in which the kernels of dried, de-hulled peas (Pisum sativum L.) are milled and fermented in place of mashed wheat grain.

The study was part of the pan-European project, TRansition paths to sUstainable legume based systems in Europe: TRUE, led by Dr Pietro Iannetta, who is a molecular ecologist at the James Hutton Institute.

Dr Iannetta said: “We found that the environmental footprint of pea gin was significantly lower than for wheat gin across 12 of 14 environmental impacts evaluated, from climate change, through water and air pollution, to fossil energy consumption.” 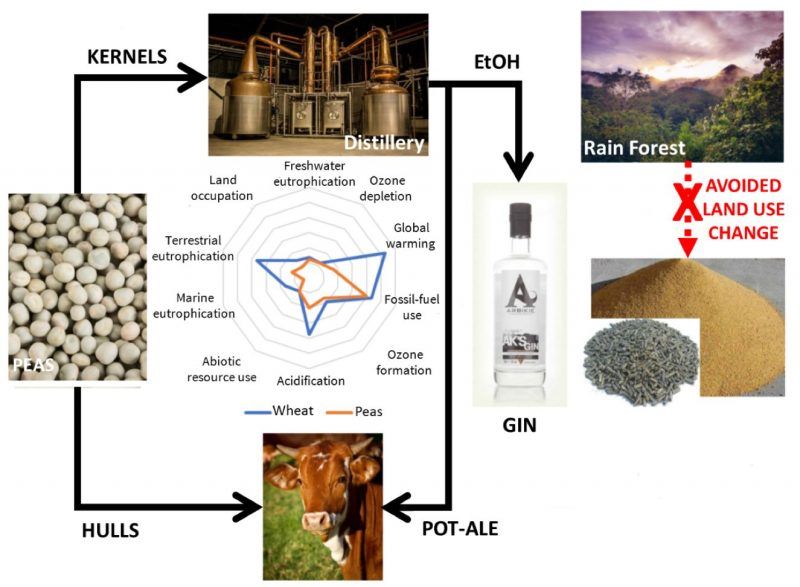 Professor Mike Williams, a botanist from Trinity College Dublin’s School of Natural Sciences, was part of the research team.

Peas – working with specialised bacteria in their roots – are able to convert nitrogen from the atmosphere into biological fertiliser. As a result, they don’t require applications of polluting synthetic nitrogen fertilisers, which are widely and heavily used in industrial agriculture. Furthermore, pea hulls and distillery co-products provide protein-rich animal feeds that can replace soybean imported from Latin America, where cultivation is driving deforestation.

Co-products from one litre of pea gin substitute up to 0.66 kg of soybean animal feed, which is twice as much as can be gained from the production of wheat gin. In fact, when the potential avoidance of GHG emissions from substituted soybean cultivation, deforestation, processing and transport are also taken into account, the environmental footprint saving can exceed the GHG emissions arising from production – effectively making pea gin carbon neutral.

And if we were to make another adjustment to our gastronomic decision-making, we could do even more for the planet.

Lecturer in life cycle assessment at Bangor University and NUI Galway, Dr David Styles, added: “Of course, if we wanted to more dramatically shrink our environmental footprint and reduce deforestation, we could eat those peas directly to provide our protein and fibre requirements – instead of drinking gin and eating beef fed on the co-products.”

But for those moments when we simply can’t resist an afternoon G&T, the combined efforts of the research team and Arbikie Distillery mean a responsible tipple needn’t cost the earth. Nor must those partaking make any sacrifices in flavour.

Manager of the Arbikie Distillery, Kirsty Black, said: “Following two distillations plus an infusion with botanical ingredients including juniper and coriander, the final gin retains the same sumptuous, aromatic flavour as if made from cereal grain.”