Ground-breaking US scientist, Trudy Mackay, has just been honoured with the prestigious 2018 Dawson Prize in Genetics in Trinity. Trudy Mackay is Director of Clemson University’s Center for Human Genetics (CHG) and a scientist of international prominence, whose futuristic research on complex genetic traits continues to move science forward in the 21st century.

The Dawson Prize, awarded every two to three years, was established by a gift from founder of Trinity’s Department of Genetics, Professor George Dawson (1927-2004). The winner receives a gold miniature of the sculpture “The Double Helix” by the late Brian King and, after accepting the award, gives a public lecture and spends time in discussion with sophister and graduate students of the Smurfit Institute of Genetics. 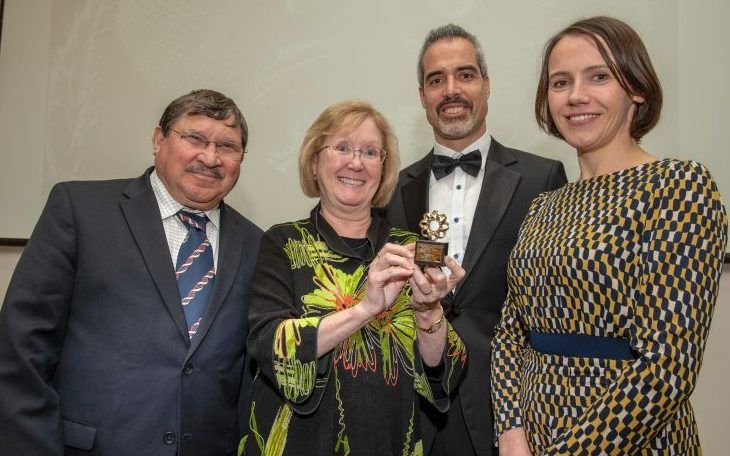 Trudy is recognised as one of the world’s leading authorities on the genetics of complex traits. Much of her research has focused on the fruit fly, Drosophila, which has proved invaluable as a model species for investigating how key genes function. In addition to being director of the Center for Human Genetics, which is part of Clemson’s College of Science, she is also the Self Family Endowed Chair in Human Genetics. Mackay is also a fellow of the National Academy of Sciences, the American Association for the Advancement of Science, the American Academy of Arts and Sciences and the Royal Society of London.

Trudy delivered a fascinating public lecture at 6pm on Thursday November 1, in which she outlined how geneticists are probing questions that underpin a range of human diseases with the aim of better understanding how these diseases function and, crucially, how we might prevent/treat them.

Focusing on key Drosophila studies that have hugely boosted our knowledge and delivered enormous societal impact as a result, she provided case studies involving genes related to alcohol sensitivity, visual senescence, and the development of glaucoma.

Trudy Mackay said: “It is a great honour to receive this prestigious award and to join the outstanding scientists who have previously been awarded the Dawson Prize.”

“I am particularly pleased that the selection committee has recognised the pivotal role the Drosophila model system has played in our understanding of complex trait genetics. Future advances in understanding the genetic basis of human disease will increasingly rely on research utilising comparative genetics and genomics to understand the function of the many thousands of variants associated with disease in human populations.”

Professor in Genetics at Trinity, Aoife McLysaght, said: “The Dawson Prize is a very special award. It encompasses George Dawson’s passion for genetics; his recognition that science needs to be shared with the public; and his placement of students at the heart of the Genetics Department – a tradition that happily continues to this day.”

“We are excited to honour the ground-breaking work of Trudy Mackay with the award of the Dawson Prize. Over the course of her distinguished career, Trudy has tackled one of the most difficult and challenging questions in genetics, namely the genetics of complex traits – the least predictable, but often most interesting traits including behavioural traits and disease risk.”

Previous winners of the Dawson Prize in Genetics

John Sulston, who passed away this year, was one of the most influential collaborators of the Human Genome Project and winner of the 2002 Nobel Prize in Physiology or Medicine. Mary-Claire King, who was awarded the National Medal of Science by President Barack Obama in 2016, has been instrumental in discoveries that have changed the ways we think about cancer. Corey Goodman, an eclectic scientist, educator and entrepreneur, pioneered genetic analysis in Drosophila. Elliot Meyerowitz, the 2018 recipient of the Gruber Prize in Genetics, has been a champion for openness and collaboration in scientific research and has been successful in making plant DNA available to a huge number of researchers. Vishva Dixit, who is vice president for discovery research at Genentech in San Francisco, has conducted pioneering studies defining the biochemical framework of how cells die.