As part of its popular Behind the Headlines series, the Trinity Long Room Hub Arts and Humanities Research Institute hosted a free public discussion to examine the prospect of a border poll and the constitutional challenges posed by a potential referendum on a united Ireland. 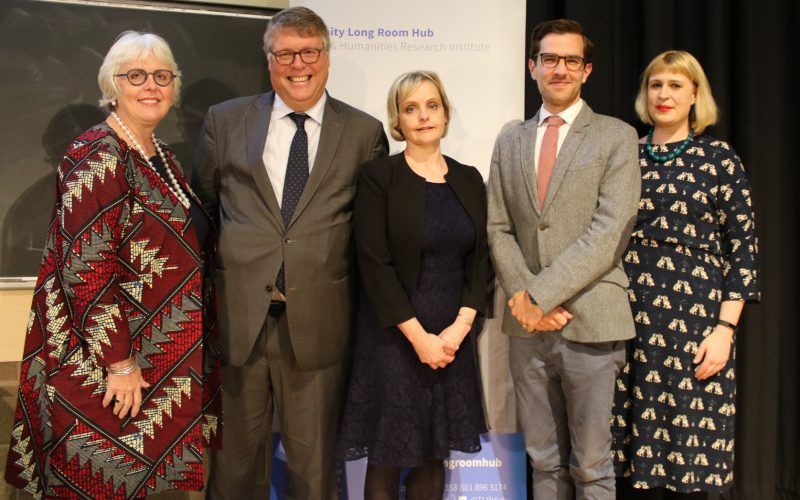 Rory Montgomery, former Second Secretary General, Department of Foreign Affairs and Trade, opened the discussion by exploring the Good Friday Agreement and how to shape current discussions on Irish unity based on the provisions in that document.

Mr Montgomery was involved in the negotiations on the Good Friday Agreement and argued that these texts were produced “late and under ferocious pressure,” and he described the last days of negotiation as “chaotic.”

That is why, he added, that subjecting the text to close examination leaves many gaps. “Twenty-one years ago, the question of how a future referendum on unity might actually be conducted and what the consequences would be, seemed quite far in the distance.”

Etain Tannam, Associate Professor of International Peace Studies in Trinity’s School of Religion, said that Brexit has undermined British-Irish cooperation, adding that if a united Ireland is to be considered carefully, then we need strong leadership based around the consent of the communities in Northern Ireland.

Asking what we can hope for, Professor Tannam said that there should be a return to the John Hume spirit of the “island of communities” – not uniting territory but uniting people.

“It must be a slow process, it must be a delicate process,” concluded Professor Tannam.

Dr David Kenny, a constitutional expert in Trinity’s School of Law prompted the audience to consider what a united Ireland would look like, and what entity we imagine emerging from a border poll.

Working through some of the practical issues on conducting a border poll, he asked if we should vote simultaneously on a new Irish constitution or if we should make a united Ireland constitution in the aftermath of that vote.

He argued that we may need “a significant overhaul of the Irish constitution” and the possibility to “start from scratch”. While he suggested that the Good Friday Agreement may not be sufficient to provide inspiration for the new constitution, what it does guarantee, Dr Kenny said, are the principles which guarantee that different communities on the island will always be treated equally.

Dr Kenny and Professor Tannam are part of a new Working Group on Unification Referendums on the Island of Ireland in partnership with Trinity, University College London and Queens University Belfast.

Belfast-based writer Jan Carson ended the discussion by talking about her conservative Presbyterian upbringing and her journey to constructing her own identity. She said that the freedom for the people of Northern Ireland to choose their identity as provided for in the Good Friday Agreement is now threatened by a hard Brexit.

She took the audience back to 1995 when she was 15 years old and attending 5-6 church services every Sunday and a “host of bible clubs and meetings” each week. At this time, Ms Carson added that she knew only four Catholics.

Fast forward to 2019, and Ms Carson credits the arts in helping to change “ingrained attitudes, long-held prejudices and ideas about identity.” Ms Carson said she has witnessed first-hand how community arts projects in Belfast have brought people together and challenged prescriptive thinking. However, she warned that the current stagnation in Stormont is threatening the future of this much-needed work.

She said the Good Friday Agreement ushered in a new period in Northern Ireland where it was acceptable to claim a multiplicity of identities. “I could be British, but also an Irish writer; a protestant who felt accepted and welcomed on both sides of the border,” she said.

The discussion also looked at the use of language in a post-Brexit Ireland. Terms such as “united Ireland” have the potential to further alienate members of protestant communities in Northern Ireland, one audience member commented.

Ms Carson highlighted the sentiment among unionists that they are being talked about rather than talked to; she emphasised the importance of understanding sensitivities in language use and making all communities part of the conversation.

Speaking at the event yesterday evening, Jane Ohlmeyer, Director of the Trinity Long Room Hub, announced ‘The Future of Ireland’ as a key theme for the Institute’s signature public events in 2019-20 as it builds up to the 10thanniversary of the opening of its iconic building in Trinity’s Fellows Square in September 2020.

About the ‘Behind the Headlines’ Discussion Series

The ‘Behind the Headlines’ discussion series hosted by Trinity Long Room Hub Arts and Humanities Research Institute offers background analyses of current issues from experts from the fields of arts and humanities research. It aims to provide a forum that deepens understanding, combats simplification and polarisation, creating a space for informed and respectful public discourse. The series is supported by the John Pollard Foundation.