The Health Research Board has presented the first HRB Impact Award 2019 to Professor Mary McCarron, from Trinity College Dublin.  The award recognises how her research has transformed the health, care, and living environments for people ageing with an intellectual disability.

As we approach international Women in Science day (11 February), what Professor McCarron has achieved reinforces the impact that women in science can have to improve lives and change policy and practice. 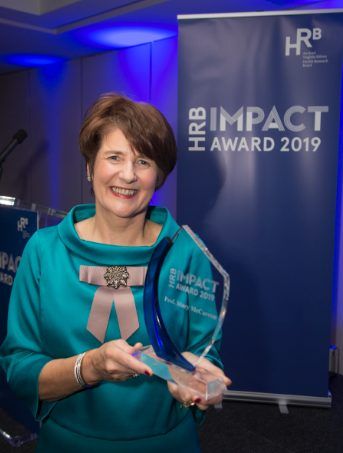 ‘The HRB Impact Award recognises people who use their research to create real changes in health and care. Prof McCarron has an incredible track record of translating her research into practice. As a result she is now is delivering better health and care, creating award winning housing projects and driving policy change that is transforming the lives of people with intellectual Disability as they age.’

‘The approach she has taken, involving this community and giving them a real voice, is also having global impact. Many of her findings, and the change she is leading, are directly transferable to the general population who are ageing too, which is attracting major interest both nationally and internationally.’

‘It is a very humbling moment to receive this level of recognition. I am so appreciative of the support I have received from the Health Research Board over so many years. I could not have achieved any of this without the many colleagues who have worked with me, and the students, research fellows and interviewers who have made all of the data collections and analyses possible’.

‘Most of all, I am grateful to the people with intellectual disabilities, their families and the service providers who have gone above and beyond to collaborate with us,  support us, guide us, and, ultimately,  to give us answers to help shape ageing for people with ID in Ireland. Not to mention more questions to investigate’.

According to Professor McCarron, ‘This Award recognises work I have done to date, alongside people with ID, my team and international colleagues. I can see the real benefits of what has been achieved, but there is much more to do. One of my key achievements has been the establishment of a Memory Clinic at the Daughters of Charity Service which has transformed the lives of people who access it. However there is real inequity of access, with many people and their carers struggling to get a diagnosis and post diagnostic support.’

People with an intellectual disability are living longer, but continue to experience significant health disparities, with the average age of death 19 years younger than for the general population. Health problems often go unrecognised and unmet, as people with ID are largely excluded from health screenings and targeted health promotions. They are often absent from the decisions that affect them the most, including financial and retirement planning, choice of residence and desired levels of care.

Professor McCarron said: ‘The legacy I want to leave is that we have the services and supports available so that every person with ID will experience happy and healthy lives in old age’.

‘With that in mind, I am in the process of establishing a national Memory Clinic with satellite clinics around the country which will provide the proper infrastructure for diagnostics and care for everyone in Ireland with ID and dementia. I will develop preventive interventions that reduce the risk not just of dementia but of a whole range of chronic conditions we have found. This is not about doing research simply as an academic pursuit.  It is about taking that research to the people who matter. In this case, people with ID themselves, their families and caregivers, government, and then translating the findings to inform and drive change’. 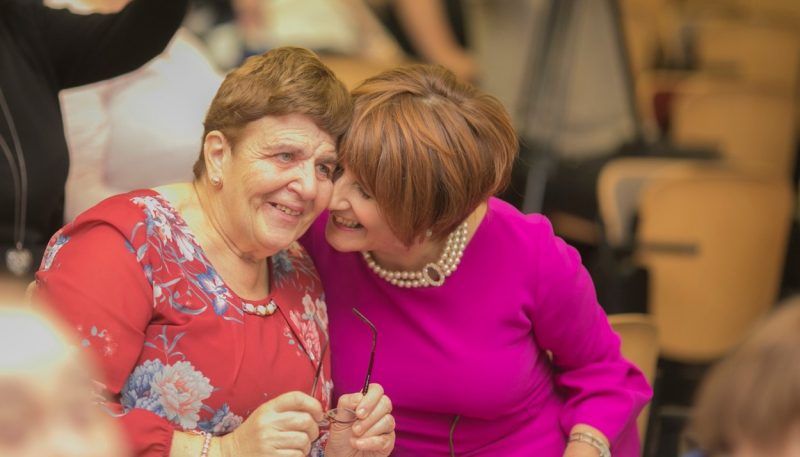 Professor McCarron’s initial research, in 1999, showed for the first time that people ageing with Down syndrome were the largest genetically predisposed group to dementia. This was a concern for all persons with an intellectual disability because life expectancy for this group was increasing. This led her to ask – what does this mean for care? And what do we need to know further about the experiences, joys and risks of ageing for people with intellectual disabilities?

Putting the patient at the centre of care, she set up the first ever longitudinal comparative study on ageing in persons with ID (IDS-TILDA) as a supplement to The Irish Longitudinal Study on Ageing (TILDA). It was the first study in the world to directly compare the ageing experience of people with ID to the general population. The data gathered shows that ageing is so similar and yet so different in many ways for people with intellectual disabilities. The data also provides a true understanding of how lives and chronic conditions change over time.

This understanding was the springboard for real change. This data by itself was just that, data.  But by involving people with ID and their carers, Mary has brought the research to life and put it to work for the benefit of people with ID.

Mary and members of the research team use their findings to improve health, inform policy, instigate change in services and transform lives. This is the very premise of the HRB Impact Award. 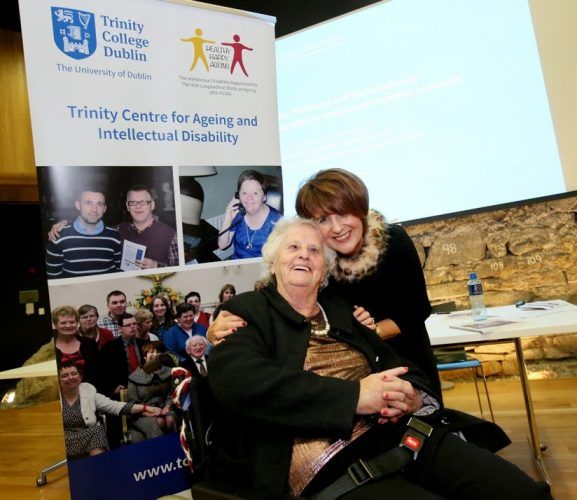 Some examples of her research impact include: –

The IDS TILDA data and Mary’s constant mentoring has already lead to:

The fact that many of the findings are also directly transferable to the general population as they age has attracted a lot of international attention. In particular, Willow View and Meadow View homes at the Daughters of Charity Disability Support Service are considered an international exemplar of best practice and regularly visited by national and international clinicians, service providers, researchers and government staffs to inform the design and development of their initiatives.