An inaugural event to award the Burkitt Medal to honour the achievements of world leaders in cancer care and research took place in Trinity on October 16th. The award recognises people with the integrity, compassion and dedication matching that of Denis Burkitt, a Trinity graduate who is known for his discovery of Burkitt lymphoma.

Reflecting on Denis Burkitt’s contribution to cancer, Professor Owen Smith, Professor of Childhood Blood Disorders at Trinity College Dublin and Consultant Paediatric Haematologist at Our Lady’s Children’s Hospital Dublin said: “A household name in the medical profession, Denis Burkitt is one of the great surgeon-research scientists of the twentieth century and indeed one of the greatest and most inspiring alumni of Trinity’s School of Medicine.”

The Burkitt Medal was awarded to Dr Murray Brennan, the Benno C. Schmidt Chair in Clinical Oncology and Director of the International Center and Vice President for International Programs at Memorial Sloan-Kettering Cancer Center (MSKCC), an organisation, with which Trinity’s cancer specialists have strong links. A number of surgeons from Trinity’s teaching hospitals, St James’s and Tallaght, were under Dr Brennan’s tutelage while in MSKCC. 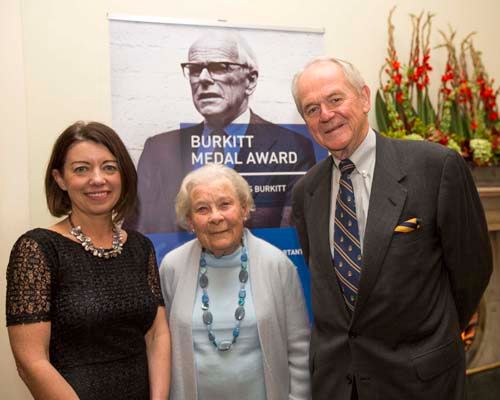 Vice-Provost and Chief Academic Officer of Trinity College Dublin Linda Hogan; Olive Burkitt, wife of Denis Burkitt; and Dr Murray Brennan, Chair in Clinical Oncology and Director of the International Center and Vice President for International Programs at Memorial Sloan-Kettering Cancer Center, who was presented with the inaugural Burkitt Medal at a celebratory event in Trinity College Dublin on October 16th.

Introducing Dr Brennan, Professor John Reynolds, Professor of Surgery in the School of Medicine, Trinity College Dublin and Consultant Surgeon at St James’s Hospital said: “Throughout his career, Dr Brennan has designed and conducted numerous clinical trials, which have produced major findings in the management of patients with soft tissue sarcomas and pancreatic cancer. Together with his colleagues, Dr Brennan created the world’s largest database of sarcoma patients. He has always been interested in supporting young surgeons, with many of his ‘fellows’ now holding leadership positions in institutions around the world.”

Olive Burkitt, wife of Denis Burkitt, presented the medal to Dr Murray Brennan and thanked Trinity for honouring her husband’s memory. Dr Brennan said that his achievements were modest compared to those of Denis Burkitt and that he was extremely honoured to be presented with the Burkitt Medal.

Vice-Provost and Chief Academic Officer Professor Linda Hogan said: “Burkitt’s legacy, celebrated at this event, is continued by Trinity academics. Cancer is a priority research theme and at present over 170 researchers across Trinity are actively working on cancer projects and generating outstanding research.”

The event was generously supported by Novartis.

Born in Auckland, New Zealand, Dr. Murray Brennan received a degree in mathematics from the University of New Zealand and a medical degree from the University of Otago in 1964. In 1970 he worked at Peter Bent Brigham Hospital, Harvard Medical School, and at the Joslin Research Laboratories. After residency at the Brigham, Dr Brennan joined the National Cancer Institute. In 1981, he joined Memorial Sloan-Kettering Cancer Center (MSKCC) as Chief of Gastric and Mixed Tumor Service. Dr Brennan was Chairman of the Department of Surgery at MSKCC from 1985 until June of 2006. He currently holds the Benno C. Schmidt Chair in Clinical Oncology and is Director of the International Center and Vice President for International Programs at MSKCC. He has lectured throughout the world and authored and co-authored more than 1,000 scientific papers and book chapters focusing on surgical oncology, endocrinology, metabolism, and nutrition, and is the author of a book on soft tissue sarcoma. Dr Brennan received numerous honours for his contribution to oncology. Dr Brennan’s interest, in addition to patient care and research, has been the development of young surgeons.

Denis Parsons Burkitt, a surgeon and research scientist who is a household name in the medical profession received his BA in 1933 and graduated from Trinity as a physician in 1935. In Africa he developed exceptional observational and analytical skills which led him to develop a successful treatment for the commonest childhood cancer in Sub Saharan Africa – Burkitt lymphoma.  His contributions to cancer remain salient today, and his discoveries continue to generate new research.