Scientists have discovered multiple gene switches in Salmonella that offer new ways to curb human infection. The discovery of the mechanisms of gene regulation could lead to the development of antibiotics to reduce the levels of disease caused by Salmonella. The breakthrough was made by Professor Jay Hinton, Stokes Professor of Microbial Pathogenesis, Trinity College Dublin and his research team and has just been published in the leading journal Proceedings of the National Academy of Sciences (PNAS).  Science Foundation Ireland funded the research which was conducted in Trinity’s Department of Microbiology, Moyne Institute of Preventive Medicine.

Salmonella causes food poisoning and kills around 400,000 people worldwide every year. The bacteria are particularly effective at causing human infection because they can survive a series of harsh conditions that kill most bacteria including strong acids in the stomach and the anaerobic and salty environment of the intestine. 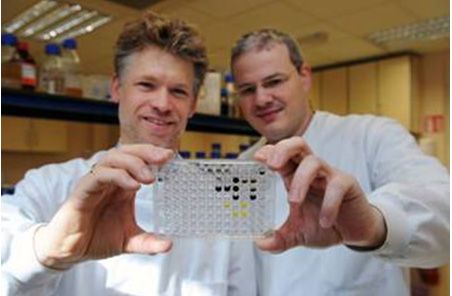 “It’s a decade since we discovered the Salmonella genes active during infection of mammalian cells,” said Professor Hinton. “Now we have found the switches that control these critical genes. My team has gained an unprecedented view of the way that Salmonella modulates the level of the weapon systems that cause human disease.”

Salmonella bacteria use a variety of proteins that act as weapons to hijack and attack human cells. Despite many decades of research throughout the world, little was understood about the way that Salmonella genes that control this weapon system are switched on. Now Professor Hinton’s team has used a new approach to identify the switches of the Salmonella Typhimurium genes. The exciting new findings show that Salmonella bacteria have more than 1,800 switches, called ‘promoters’ and reveals how they work.

Understanding how Salmonella switches on its genes should aid the discovery of new antibiotics that will knock out the weapon systems of Salmonella and stop the bacteria causing infection.

The researchers also identified 60 new RNA molecules, called ‘small RNAs’.  Some of these can actually override the switches of Salmonella genes.

“Just five years ago, we didn’t realise that small RNAs played such an important role – or that the switches of so many Salmonella genes were controlled by small RNAs. Identifying these small RNAs could lead to completely new ways to prevent bacterial disease, but this will take at least a decade, ” said Professor Hinton.

Professor Hinton’s team worked in collaboration with Professor Charles Dorman’s group at Trinity College Dublin, the Wellcome Trust Sanger Institute and the University of Würzburg. They used several cutting edge techniques during the project, called chip-chip and RNA-seq.  “I think one reason that our findings are making such impact is that this combination of the new technologies has not been used before for a bacterial pathogen” says lead author Dr Carsten Kröger.

Full title of Proceedings of the National Academy of Sciences (PNAS) article: “The transcriptional landscape and small RNAs of Salmonella enterica serovar Typhimurium”