Can one powerful person change the course of history?

Can the personality of one person change the course of history? The critical role played by powerful leaders in transforming the path of history was the focus of a public lecture delivered by best-selling author and historian Margaret MacMillan on Thursday, October 26, 2017 in the Edmund Burke Theatre, Trinity College Dublin.

Individuals cannot make history on their own but sometimes an individual and the times they live in meet to produce dramatic change, according to Margaret MacMillan, Oxford Professor of International History, who delivered the 2017 Annual Edmund Burke Lecture. 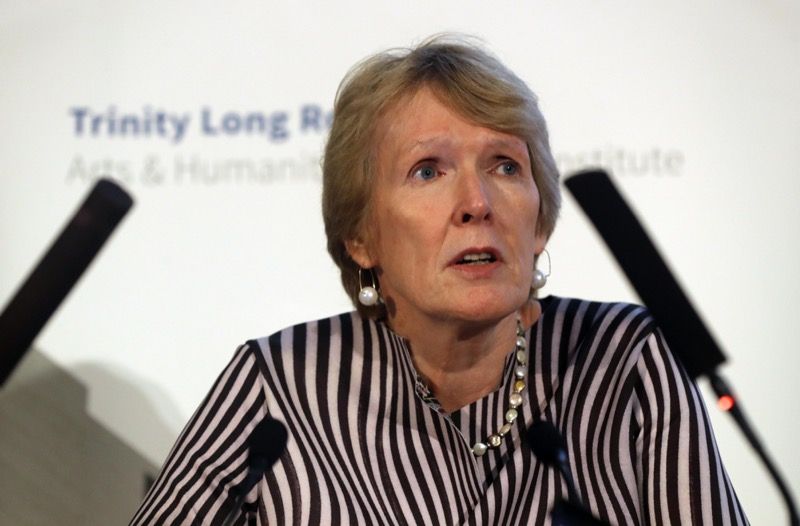 Most historians agree that that it is the strong forces of economics and social change which are the true forces that shape our past. However, there are crucial junctures where a powerful leader or thinker can change the course of history.

Such was the case of Vladimir Lenin, Adolf Hitler, Franklin Delano Roosevelt, Karl Marx and Mohammed, explains Professor MacMillan. In her talk she will also refer to contemporary leaders and consider whether they too have what it takes to make dramatic changes to the path of history.

"The Great Man—or Great Woman—theory of history is now widely discredited but sometimes it really does matter who is in a particular place at a particular time. Let us ask what would have happened if Hitler had died in trenches in the First World War or Winston Churchill had been killed when he was knocked down by a car in New York in 1931," explains Professor MacMillan.

"History is shaped by great currents such as economic and social changes but historians continue to disagree over whether individuals, whether leaders or thinkers, also make a difference. Individuals do not make history on their own but sometimes an individual and the times meet to produce change.  It can be argued that the Reformation would have taken a different course without Martin Luther or that the Russian Revolution might not have led to Soviet communism without Lenin and Stalin."

Entitled 'Sometimes it Matters Who is in Power' the public talk is hosted by Trinity Long Room Hub Arts and Humanities Research Institute. It is the fourth Annual Edmund Burke Lecture, which celebrates Trinity’s strong connection with the 18th-century philosopher, historian and politician Edmund Burke.

Jane Ohlmeyer, Professor of Modern History and Director of Trinity Long Room Hub, commented: “Edmund Burke is one of Trinity's most famous and most distinguished graduates. One of his central and life-long concerns was considering what moral codes should underpin the social order, constrain the use of power and inform our behaviour as responsible citizens. We are delighted to be welcoming Professor Margaret MacMillan, a leading public intellectual of our time, to explore the role of powerful leaders and thinkers in shaping history – a topic which is as important today as it was in Burke's time."

The Annual Edmund Burke Lecture is supported by a generous endowment in honour of Padraic Fallon by his family. Previous lectures in the series were delivered by award winning writer and journalist, Robert Fisk; Professor Roy Foster, Chair of Irish History, University of Oxford and Baroness Onora O'Neill, former chair of the UK's Equality and Human Rights Commission.

Margaret MacMillan is a Professor of International History at the University of Oxford and the former Warden of St. Antony's College. Her books include 'Women of the Raj' (1988, 2007); 'Paris 1919: Six Months that Changed the World' (2001) for which she was the first woman to win the Samuel Johnson Prize; 'Nixon in China: Six Days that Changed the World'; 'The Uses and Abuses of History' (2008); 'Extraordinary Canadians: Stephen Leacock' (2009); 'The War that Ended Peace' (2013). Her most recent book is 'History's People: Personalities and the Past' (2015).