Calls for new Taoiseach to make the 1926 census available online

As a panel discussion at Trinity College Dublin explored the significance of the Four Courts fire of 1922, and the destruction of the Public Records Office resulting in the loss of over 700 years of Ireland’s historical and genealogical records, the Taoiseach was called on to open the 1926 census and make it available online. 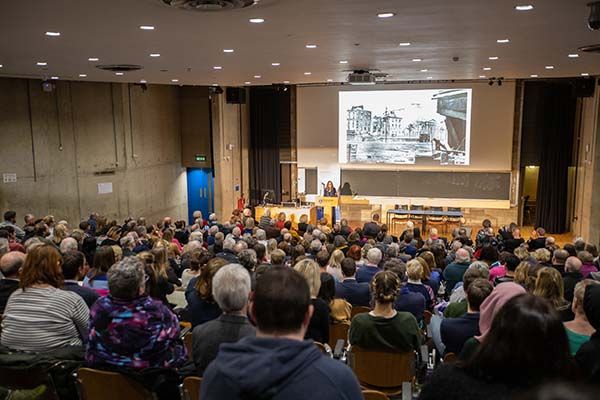 Eminent archivist Catriona Crowe, formerly of the National Archives of Ireland, opened the Out of the Ashes discussion All that remained – The Four Courts Blaze of 1922 by detailing the explosion and fire which led to almost all of the records in the Public Records Office being destroyed, and described it as “one of the greatest cultural calamities ever to befall any country,” adding that “we did it to ourselves.”

Out of the Ashes is a three-year lecture series organised by the Trinity Long Room Hub Arts and Humanities Research Institute exploring themes of cultural loss and recovery, both in Ireland and internationally. The series is coordinated by Professor Peter Crooks, Department of History, Trinity College Dublin and programme director of Beyond 2022, an exciting project to digitally recreate the Public Records Office.

One thing is clear from this sorry tale, nobody gave a damn about the records in the Public Records Office

Ms Crowe lamented the inaction of those involved in the bombardment of the Four Courts, resulting in an explosion on the third day. She said officers engaged in the battle refused calls for a ceasefire by the fire brigade in order to abate the further spread of the fire, which burned for several days, subsequently engulfing the Public Records Office across the road.

Speaking to the 400 strong audience in the Edmund Burke Theatre, she encouraged the attendees to write to the new Taoiseach asking them to “use their power over the Central Statistics Office (CSO) to open the 1926 Census as soon as possible.” Ms Crowe is Manager of the Irish Census Online Project, which placed the 1901 and 1911 censuses online free of charge in recent years.

In the weeks following the destruction of the Four Courts and the Public Records Office in 1922, staff gathered up documents which they wrapped in brown paper and labelled. For 95 years those parcels remained unopened. In 2017 a survey was carried out and 378 bundles of paper and vellum were found inside the parcels. Zoe Reid, Senior Conservator, National Archives of Ireland, described the process of assessing the damage caused by the fire nearly 100 years on.

Revisiting what the staff did in the immediate aftermath of the fire, she went on to show striking visuals of the condition of the material that was salvaged in the rubble, and how it was labelled and repackaged, work which records show may have taken up to 12 months.

Documents were found to have been displaced as far as the hill of Howth following the fire, and a public appeal was made to recover these materials. Describing as “hugely exciting” the process of opening the 378 brown paper parcels in 2017, Ms Reid said that the next steps of conservation might include DNA analysis and x-ray tomography.

Lar Joye, Port Heritage Director at Dublin Port and until recently, Chair of the Irish National Committee of the Blue Shield, concluded the discussion by providing an overview of the important work of Blue Shield International in helping to protect heritage from conflict and disaster, to avoid the fate that the Public Records Office met in 1922. Referring to it as the “cultural equivalent of the Red Cross”, Mr Joye said the Blue Shield was set up during the Bosnian War when many cultural sites were targeted.

The 1954 Hague Convention for the Protection of Cultural Property was only ratified in Ireland in 2018, and Mr Joye spoke of the work of the Irish National Committee of the Blue Shield which is underpinned by this international law. Arguing that there needs to be “more planning at a national and international level,” on how to protect collections in the face of natural disaster, Mr Joye said that working with first responders is essential.

Out of the Ashes: Collective Memory, Cultural Loss and Recovery:

This three-year lecture series explores the theme of cultural loss and recovery across the centuries, from the destruction of the Library of Alexandria in antiquity to contemporary acts of cultural loss and destruction. ‘Broken Bones, Broken Stones: Iconoclasm in World History’ is the next talk in the series and will take place on the 9 March 2020. Find out more here.

The Out of the Ashes lecture series is generously supported by Sean and Sarah Reynolds.