A new book on one of Trinity’s greatest graduates was launched in the Provost’s House by the Minister for Transport, Tourism, and Sport, Leo Varadkar (May 21st). The book, ‘Edmund Burke: Philosopher, Politician, Prophet’, by Dr. Jesse Norman, Conservative MP for Hereford and South Herefordshire, looks at the life and legacy of one of the most influential political thinkers in world history.

Welcoming guests at the event, the Provost, Dr. Patrick Prendergast, took the opportunity to recognise Burke’s enduring presence at Trinity College Dublin, and his own deep admiration for him, as he launched a new public lecture series on Edmund Burke organised by the Trinity Long Room Hub.

To mark Trinity’s deep and lasting connection to Edmund Burke, and to express the inspiration his life and work as a public intellectual offer to us, the Trinity Long Room Hub will institute a prestigious annual Edmund Burke lecture, delivered by a leading public intellectual of our time on a topic that engages with the challenges facing us today. One of Burke’s central and life-long concerns was the question what moral codes should underpin the social order, constrain the use of power and inform our behaviour as responsible citizens. This is as important today as it was in Burke’s time, and the Edmund Burke lectures will keep his manifold legacies alive by providing a prominent forum for contributing in his spirit to the wider discourse about what society we want to live in and what traditions, perspectives and values we need to draw on in the shaping of our future. 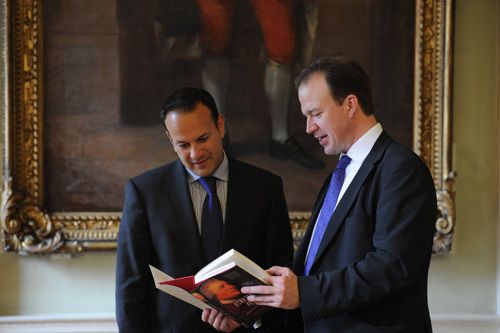 Discussing the occasions when Burke has been quoted in the Irish parliament by politicians from all parties, Minister Varadkar reflected on his own interest in Burke and his political philosophy.  He noted how Burke had influenced politicians and theorists around the world over the centuries, and quoted from the book’s conclusion that Burke provides a ‘vision of human possibility and renewed social value’ and that this ‘may prove to be Burke’s greatest legacy’.

Praising Burke as ‘both the greatest and most underrated political thinker of the past 300 years’,  Dr. Jesse Norman also spoke of the influence of Trinity on Burke’s development.  While researching the book Dr. Norman visited Trinity College, where he viewed the John Henry Foley statue at Front Gate, and had a viewing of the James Barry portrait of Burke. A discussion of this portrait forms the opening of Chapter 7 of the critically acclaimed book.

The launch was attended by some leading scholars, politicians, and figures from the legal world as well as students from the College Historical Society, the student society which traces its origins back to a club founded by Burke.