Beyond 2022 Artist in Residence Mairéad McClean presents a preview of her film in progress, The Nick of Time, in the Trinity Long Room Hub

On June 30, the Trinity Long Room Hub’s Decade of Centenaries Artist in Residence, Mairéad McClean, presented extracts from her film in progress as part of the Beyond 2022 Project. Mairéad was joined for a conversation about her artistic process with Dr Angela Griffith, Department of History of Art and Architecture, Trinity College Dublin, and Orlaith McBride, Director, National Archives of Ireland.

When Mairéad McClean was selected to work with the Beyond 2022 project as Decade of Centenaries Artist in Residence in association with the Trinity Long Room Hub, she was keen to explore the idea that history is not static and that the past is a moving thing.

“As an artist who works with the mediums of film, photography and sound, I can make time go slow. I can speed it up. And at the click of a camera button, I can even stop time, for an instant.”

In Mairéad’s performance lecture in the Trinity Long Room Hub on June 30th, she talked about the relationship between sound and image and how one can affect the audience’s reading of the other.  During her presentation, she showed the audience excerpts from her new film, 'The Nick of Time', which is currently in production.

Talking directly about her relationship to sound, Mairéad recounted anecdotes of growing up in Beragh, Co. Tyrone, where she and her sisters would stay awake at night playing a unique game. Based on the popular British game show Name That Tune, in which contestants would test their knowledge of popular music, Mairéad and her sisters would attempt to identify songs simply from tempos and patterns. One sister would knock on their headboard in a rhythm, and the other two would try to guess the song that was being played.

“The reverberations of the knocks travelled from the headboard through the mattress into our bodies and on into our dreams”, Mairéad said.

How sound travels and reverberates over time served as inspiration for Mairéad’s new work after she watched old film footage of the explosion at the Four Courts in 1922. In the opening sequence of The Nick of Time, we see a tuning fork being struck as the accompanying date on screen, 2022, turns back to 1922. 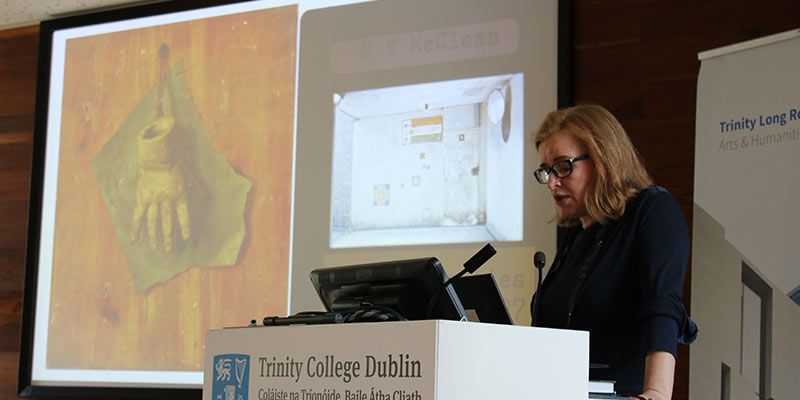 Beyond 2022 is a government funded, multi-disciplinary research project based at Trinity College Dublin working to create a virtual reconstruction of the Public Record Office of Ireland in the Four Courts building, which was destroyed in the opening engagement of the Civil War on June 30th, 1922.

In her role as a Decade of Centenary Artist in Residence, Mairéad joined the Beyond 2022 team of historians, archivists and software designers at meetings each week online, listening in to not only what exciting historical documents the team were hoping to add to the virtual repository, but how they were using new technology to bring this material to a much wider public.

“What became clear for both them and me, was that the project was about exploring, searching, finding, and locating and to feel the satisfaction of putting pieces of the jigsaw puzzle back together again”, she said. 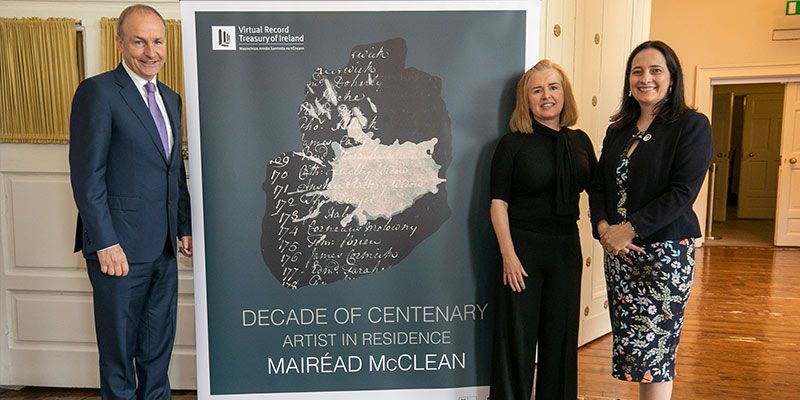 In studying and working with conservators within the National Archives (UK), the National Archives of Ireland, and The Public Records Office in Northern Ireland, Mairéad is using her film to explore how documents saved from the fire in 1922, are being carefully repaired and restored by these institutions, and how tiny fragments of material lost in the fire can help recover the memory of this lost archive.

This work has been essential to helping tell the story of the public records restoration.

“Mairéad's work brings vividly back into the imagination the voices and traces of history lost in the blaze of 1922”, said Dr Peter Crooks, Programme Director for Beyond 2022. “Artists are perfectly positioned to challenge our preconceptions and help us face uncomfortable truths. This is a vital contribution to our public discourse about history and memory." 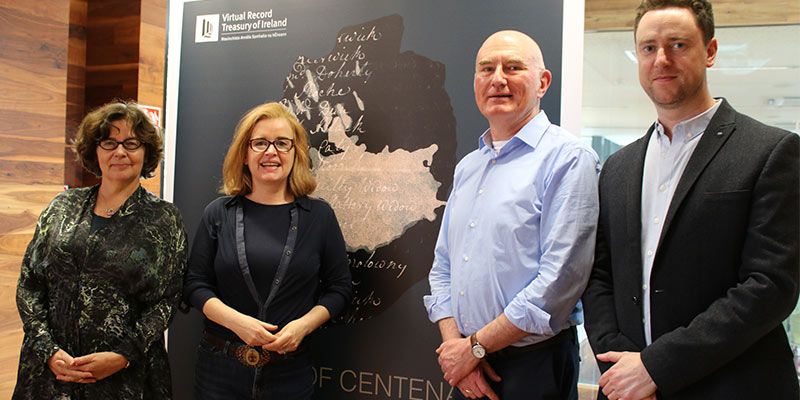 Following her presentation, Mairéad was joined by Dr Angela Griffith, Department of History of Art and Architecture, Trinity College Dublin and Orlaith McBride, Director, National Archives to discuss her film and the work and thinking that went into it.

When speaking about the decision to involve artists in the Decade of Centenaries commemorations, Orlaith said, “It’s about opening up the artistic process to the archives and in particular to see what that artistic lens might reveal about the archival process.”

Following the panel discussion, Mairéad announced to the audience that she has received Arts Council of Ireland Film Project funding to continue working on her film in order to extend it and make a longer more in-depth piece on this vital part of Irish history. She extended her thanks to Trinity Long Room Hub for hosting her residency, the Beyond 2022 team for welcoming her into their team, and all the core partners who have supported her work this year.

100 years after the Four Courts blaze, Mairéad’s work, in tandem with Beyond 2022, will help tell the story of Ireland well into the future.