A collaborative team of marine biologists has discovered that basking sharks, hundreds of which are found off the shores of Ireland, Cornwall, the Isle of Man and Scotland, can jump as fast and as high out of the water as their cousins, the famously powerful and predatory great white shark.

Basking sharks are the second largest fish in the world, reaching lengths of up to 10m (33ft). Until now, they have previously had a reputation for being slow and languid as they scour the sea for their staple diet of plankton. 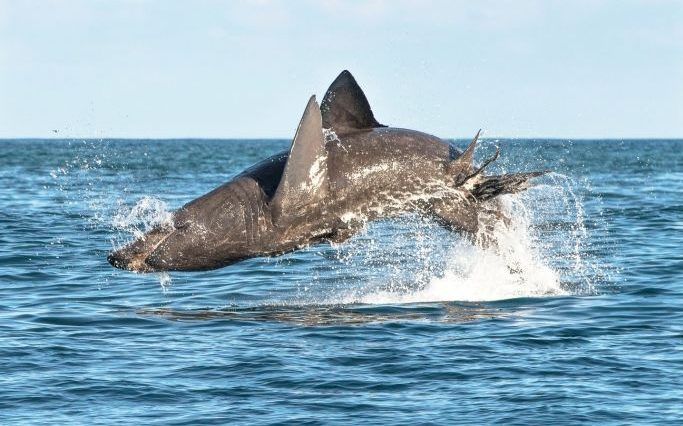 However, a new study, recently published in leading international journal Biology Letters used video analysis for both species and estimated their vertical swimming speeds at the moment at which they left the water. Furthermore, they attached a data recording device to one large basking shark to measure its speed and movement, and also to store video footage.

At one point, in just over nine seconds, and with 10 beats of its tail, the basking shark accelerated from a depth of 28 m to the surface and broke through the water at nearly 90 degrees. The shark cleared the water for one second, and its leap peaked at a height of 1.2 m above the surface.

To achieve this breach, the basking shark exhibited a six-fold increase in tail beat frequency and attained a top speed of approximately 5.1 m/s. To put this into perspective, this is more than twice as fast as the average competitor in the Olympic men’s 50m freestyle swim.

The videos from boats and the land of both basking sharks and great whites breaching showed similar speeds of breaching in other individuals. The basking shark videos were recorded in 2015 at Malin Head, Ireland, while the great white shark videos were recorded in 2009 at two sites in South Africa, where seal-shaped decoys induced feeding attempts. 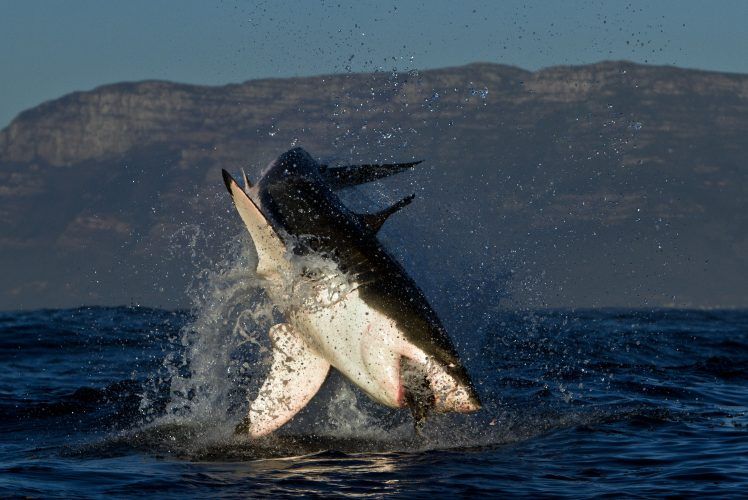 Assistant Professor in Zoology at Trinity College Dublin, Dr Nick Payne, was a co-author of the journal article. He said: “The impressive turn of speed that we found basking sharks exhibit shows how much we are yet to learn about marine animals – even the largest, most conspicuous species have surprises in store, if we’re willing to look.”

Dr Jonathan Houghton, Senior Lecturer in Marine Biology at Queen’s University Belfast, said: “This finding does not mean that basking sharks are secretly fierce predators tearing round at high speed; they are still gentle giants munching away happily on zooplankton.”

“It simply shows there is far more to these sharks than the huge swimming sieves we are so familiar with. It’s a bit like discovering cows are as fast as wolves (when you’re not looking).”