Archives around the world join forces to bring Ireland’s destroyed Public Record Office back to life. 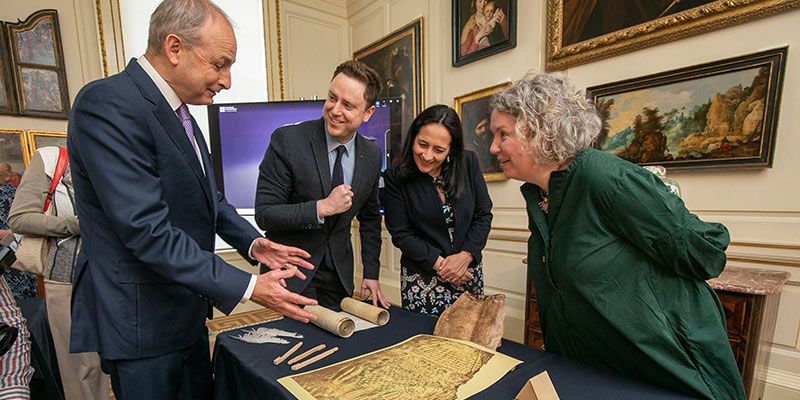 For the first time in 100 years, the public will be able to ‘step back in time’ to explore a virtual recreation of the Public Record Office of Ireland and its collections, as they were on the eve of their destruction at Dublin’s Four Courts at the outset of the Civil War.

When the Public Record Office of Ireland was destroyed by fire in 1922, hundreds of thousands of precious historical documents relating to all aspects of Irish life were lost — apparently forever. The Virtual Record Treasury of Ireland is a vast and growing treasury of replacement documents newly discovered in partner archives around the world.  Freely and permanently available online, everyone with an interest in Ireland’s past will be able to explore seven centuries of Irish history through tens of thousands of searchable documents. (https://virtualtreasury.ie/)

The Virtual Record Treasury of Ireland is the outcome of a five-year State-funded programme of research entitled ‘Beyond 2022’. Led by Trinity College Dublin, Beyond 2022 has combined historical investigation, archival conservation, and technical innovation to re-imagine and recreate, through digital technologies, the archive that was lost on 30th June 1922.

The ground-breaking research programme has been developed by historians in Trinity College and computer scientists in the SFI ADAPT Centre, in partnership with five core partners: National Archives of Ireland, National Archives (UK), Public Record Office of Northern Ireland, Irish Manuscripts Commission and the Library of Trinity College Dublin.  The Virtual Record Treasury is a meaningful legacy for the State’s Decade of Centenaries programme (2012-2023).  It is funded by the Government of Ireland under Project Ireland 2040 through the Department of Tourism, Culture, Arts, Gaeltacht, Sport and Media.

The Virtual Record Treasury at a glance

For the first time in 100 years, ‘step inside’ the six-storey Victorian Public Record Office, as it was on the eve of its destruction in 1922, via an immersive 3D experience.

Interested in Ireland’s first census which took place in 1766? … Or in how Ireland was more intensely mapped and surveyed than anywhere in the world during the Cromwellian era? … Or how Ireland was governed by the English crown in the Middle Ages? ... Three ‘Gold Seam’ collections, where up to 80% of the lost material has been retrieved, are a treasure trove of information about life in Ireland across the centuries.

Dive deep into Ireland’s past with the Knowledge Graph for Irish History – a powerful new research tool which allows for the discovery of new connections between people and places…2.7 million linked data entities are available to search

Speaking ahead of the launch, Taoiseach Micheál Martin, said:

“The Virtual Record Treasury is an enduring and meaningful legacy for our Decade of Centenaries.  It belongs to the people of Ireland, democratising access to our rich archival heritage and making our shared history accessible for everyone.  It is an invaluable historical resource for people of all traditions across the island and for everyone of Irish heritage around the world.  It is an immense achievement and testament to the commitment and dedication of the Beyond 2022 project team.”

“This is a really exciting project which opens new doors into Irish history. It brings together a wealth of information from around the world to illustrate what happened in Ireland, and helps to fill in the blanks arising from that infamous 1922 fire in the Public Record Office. I congratulate the team on bringing this amazing project to life.”

“The pioneering technology behind the Beyond 2022 project is so exciting and testament to Ireland’s leadership and talent in ground-breaking research and innovation. The Decade of Centenaries has gifted us with a wealth of resources at our fingertips, such as the Virtual Record Treasury, to help us to step back in time and engage with our history, grounded in the factual evidence for the events that occurred. What was previously unexplored, unintelligible, or inaccessible to us is now revealed, allowing for new insights and perspectives. It is an inspiring and enduring legacy for our Decade of Centenaries, which my Department is delighted to support under Project Ireland 2040.  The partnership and generosity of spirit from the archival partners and the resulting all-island and international collaboration is outstanding and most sincerely and deeply appreciated.”

“The Record Treasury at the Public Record Office of Ireland was one of the great archives of Europe.  The devastating cultural loss of the archive in 1922 has hampered our understanding of Ireland’s past. Thanks to the meticulous record-keeping of generations of archivists, historians, copyists, genealogists and clerks, thousands of duplicates and transcripts of Ireland’s records, scattered across the world, have been preserved. Record by record, shelf by shelf, historians, archivists and computer scientists are bringing Ireland’s destroyed national treasure back to life.”

“The Virtual Record Treasury of Ireland draws strength from partnerships which now link the core partners with over 70 institutions worldwide, including the Library of Congress, USA; the Huntington Library California; Parliamentary Archives of the UK Houses of Parliament and the National Library of Australia. Closer to home, county archives, university libraries and private collections across Ireland have joined in the work. As more partners join and more historical records are added the Treasury will continue to grow.”

“What seemed impossible has been made a reality by the fusion of historical research with technological innovation.  I want to congratulate the team at the ADAPT Centre in Trinity who worked so creatively with historians and archivists to make this virtual treasury accessible to the public. Technology should be at the service of society and, having watched this project evolve over the past four years, it gives me great pride to see that demonstrated today.”

“Back in 2018, the Expert Advisory Group was delighted to endorse the initial research concept underpinning the Virtual Record Treasury.  I think it is fair to say that what has been achieved since has exceeded all of our expectations.  Beyond 2022 has created a magnificent opportunity for people of all ages to explore and engage with the past in an unprecedented way, grounded in factual analysis and archival discovery. It is a wonderful and enduring legacy for our Decade of Centenaries.”