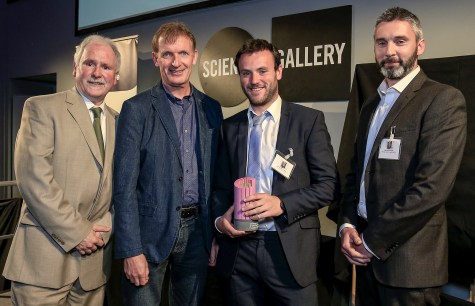 Robbie Fryers, a 2014 graduate of the Engineering with Management programme received the people's choice award on behalf of himself and Talita Holzer-Saad for their product "WayFinder" which is a navigational aid that makes safe, independent travel a possibility for all its users - including pre-teens, the elderly and those with an intellectual disability. The awards are an initiative of the Centre for Excellence in Universal Design at the National Disability Authority, supported by Enterprise Ireland, and the people's choice award is voted for on the night by the audience from those projects shortlisted by a panel of judges.

Universal Design is the design and composition of product, service or system so that it can be accessed, understood and used to the greatest extent possible by all people regardless of their age, size, ability or disability. The 7 Principles of Universal Design were developed in 1997 by a working group of architects, product designers, engineers and environmental design researchers, led by the late Ronald Mace in the North Carolina State University.

Talita and Robbie developed Wayfinder as part of their studies in the 4E5 Innovation in Product Development Module led by Prof. Kevin Kelly. This course takes the students through an innovation process pedagogy based on the user-centred design philosophy developed and widely used in Silicon Valley. Students on the 4E5 programme work on project teams, usually with an international partner university and a corporate project sponsor. 2015/16 saw 4 teams working with University of Sao Paulo, Stanford University and Karlsruhe Institute of Technology on projects sponsored by MediaSaturn Holdings, Swisscom, Netposa and Trinity Robotics.

Robbie and Talita worked with the Centre for Practice and Healthcare Innovation in TCD, with Dr. John Dinsmore and Profs. Mary McCarron and Philip McCallion. They also widely consulted with users and stakeholders in the area of intellectual disability. Auveen Bell, co-founder of children's charity BlossomIreland, said: "I heard, almost by accident, about the Wayfinder app that one of Kevin's student teams had developed. I thought 'Wow! - We have to talk about this' as I could immediately see the potential. In BlossomIreland, we provide camps and after-school activities for children with intellectual disability (ID), and as the mother of a child with ID I could visualise straight away the difference it could make to the independence of these young people while giving their parents and carers some peace of mind."

In addition to their success at the UDGC awards, Robbie and Talita have also won funding from within TCD – the Dean's Research Initiative Fund in the Faculty of Health Sciences. This will see Robbie begin work on the next phase of Wayfinder in September 2016, hopefully joined in January by Talita (after their respective graduations), as they seek to commercialise Wayfinder.

Speaking of the achievement, Prof. Kelly said "I am very proud of Robbie and Talita, who worked extremely hard on their project and developed a very efficient, effective and innovative solution that can be truly life enhancing for their users. Like all good innovation it was grounded in hard work, empathy with the user and long cycles of testing and development. It is gratifying to receive any award, let alone two - recognising both the quality of the existing work and the potential for future development. I look forward to working with Talita and Robbie in the next phase, and am sure that this project will act as a flagship for student innovation pathways from 4E5 and engineering in general".