Research projects undertaken in Trinity's School of Creative Arts are of the highest standard and all academic staff are encouraged to undertake research to supplement and inform teaching. Below is a sample of some staff's recent research projects. 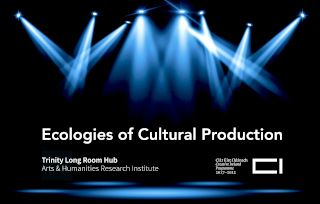 Ecologies of Cultural Production is a research project examining career construction in film, television drama and theatre – How do people enter the fields of filmmaking and theatre-making, and how do they develop their careers?

Through a survey of prominent actors, writers, and directors, the research aims to:

The purpose of the project is to inform public policy on arts funding and to establish a methodology that might be applied to all sectors of cultural production. The two immediate outputs will be a one-day seminar, 'Ecologies of Cultural Production', and a written report for Creative Ireland.

Postdoctoral researcher Dr Néill O'Dwyer and Assist. Prof. Nicholas Johnson in Drama launched a pioneering production of augmented reality drama in the CHQ vaults in Dublin on 6th September 2019. Part of an inter-disciplinary team of researchers, Dr O'Dwyer and Assist. Prof. Johnson helped develop the third and final part of a two-year practice-based research trilogy, wherein the text has been reinterpreted for 1) webcast - Intermedial Play, 2) virtual reality - Virtual Play and 3) augmented reality - Augmented Play. This research presented a ground-breaking milestone for V-SENSE, a leading computer science research group at Trinity; Volograms, a domestic SME leading VR, AR and Mixed Reality technologies for the creative cultural industries; and the Trinity Centre for Beckett Studies based at the Trinity Long Room Hub, whose partnership was pivotal in the production, translation and dramaturgical direction of Beckett's Play.