Visions of Europe in Irish Cultural Debate: An Online Conversation with Richard Kearney

‘Visions of Europe in Irish Cultural Debate’ takes as its starting point the fact that Europe has never simply designated a geographical space or a political project, but has also been an idea, an act of imagination. From this perspective, the project explores how literature and cultural debate since 1940 has informed Ireland’s political and social relationships with Europe and the EU. The project is supported by the DFA Communicating Europe Initiative 2022.

In this opening online seminar we are joined by Richard Kearney, one of Ireland’s most prominent public intellectuals, whose work in philosophy, culture and politics builds on a deep engagement with Europe. Professor Kearney will reflect in particular on his editorship of The Crane Bag (1977-85) and the ways in which the journal sought to reframe Irish experience in terms of continental thinking, in a period marked by the Northern Irish Troubles and Ireland’s accession to the EEC. In response to his talk, Professors Michael Cronin, Eda Sagarra, and Aidan O’Malley will explore how cultural engagements with Europe in the second half of the twentieth century moulded key aspects of Irish life, shaping attitudes to gender, class, religion and language. The discussion will be chaired by Professor Eve Patten, Director of the Trinity Long Room Hub Arts and Humanities Research Institute.

This online seminar is open to the public, please register here.

PARTICIPANTS
Richard Kearney holds the Charles B. Seelig Chair of Philosophy at Boston College. He is the author of over twenty-five books on European philosophy and literature (including two novels and a volume of poetry) and has edited or co-edited twenty-one more. His most recent publications include Touch: Recovering Our Most Vital Sense (Columbia University Press, 2021) and, with Melissa Fitzpatrick, Radical Hospitality: From Thought to Action (Fordham University Press, 2021). A member of the Royal Irish Academy, Richard Kearney was formerly a member of the Arts Council of Ireland, the Higher Education Authority of Ireland and chairman of the Irish School of Film at University College Dublin. He has presented five series on culture and philosophy for Irish and British television. In the 1980s and ’90s he was involved in the drafting of a number of proposals for a Northern Irish peace agreement. Currently he is the international director of the Guestbook Project, Hosting the Stranger: Between Hostility and Hospitality.

Michael Cronin is 1776 Professor of French in Trinity College Dublin. Among his recently published titles are Eco-Translation: Translation and Ecology in the Age of the Anthropocene (Routledge, 2017), Irish and Ecology: An Ghaeilge agus an Éiceolaíocht (FÁS, 2019) and Eco-Travel: Journeying in the Age of the Anthropocene (Cambridge University Press, 2022). He is a Member of the Royal Irish Academy, the Academia Europaea, an Officier in the Ordre des Palmes Académiques and a Fellow of Trinity College Dublin. He is a former Irish Literature Advisor to the Arts Council of Ireland and worked as a journalist/presenter for the TG4 Arts programme Imeall.

Eda Sagarra is Emeritus Professor of German at Trinity College Dublin and was also the university’s first female Registrar. She was educated in Ireland, England, and France before studying History and German as an undergraduate at UCD and as a postgraduate at Freiburg, Zurich and Vienna. She served as Chair of German in Trinity College Dublin (1975-98) and  was Founding Chair of the Irish Research Council for the Humanities and Social Sciences (1998-2006). Her many publications cover early modern and modern German literature and social history, and include A Social History of Germany 1648-1914 (Methuen 1977; 2. revised ed. Transactions 2003). She has also written on the early history of the Irish Free State and is author (with Fiona Murray) of The Men and Women of the Anglo-Irish Treaty Negotiations 1921 (Laurelmount Press, commemorative edition Jan., revised ed. July 2022). Her memoir, Living with My Century, was published by Lilliput Press in 2022. She is a member of the Royal Irish Academy and the Austrian Academy of Sciences.

Aidan O’Malley is an Associate Professor and Chair of English Literary Studies at the Department of English, University of Rijeka. He is the author of two monographs: Field Day and the Translation of Irish Identities: Performing Contradictions (Palgrave Macmillan, 2011), and Irska književnost i kultura, 1600.–2000.: Stvaralaštvo na jeziku kolonizatora (FFRI Press, 2021). With Eve Patten, he edited Ireland, West to East: Irish Cultural Connections with Central and Eastern Europe (Peter Lang, 2014), and he also edited a special issue of the European Journal of English Studies (2013) on ‘Myths of Europe: East of Venice’. He has written numerous other articles and chapters on different aspects of Irish literature, culture and translation. Recent publications include: ‘Irish Writers and Europe’, in, Eve Patten, ed., Irish Literature in Transition 1940-1980 (Cambridge University Press, 2020); ‘Translation’, in, Geraldine Higgins, ed., Seamus Heaney in Context (Cambridge University Press, 2021); and, ‘Virtually There: Spectral Ireland and European Stereotypes in the Novels of Paul Murray’, in, Jürgen Barkhoff and Joep Leerssen, eds., National Stereotyping, Identity Politics, European Crises (Brill, 2021).

Eve Patten is Director of the Trinity Long Room Hub Arts and Humanities Research Institute and Professor of English at Trinity College, Dublin. A lecturer in nineteenth and twentieth-century Irish and British literature and cultural history, she is the author of several books, including Imperial Refugee: Olivia Manning’s Fictions of War (Cork UP, 2012), and editor of a recent volume of essays, Irish Literature in Transition, 1940-1980 (Cambridge University Press, 2020). Her monograph on representations of Ireland’s revolutionary decade in English writing, Ireland, Revolution, and the English Modernist Imagination, was published by Oxford University Press in 2022. She is a Fellow of Trinity College Dublin.

Please indicate if you have any access requirements, such as ISL/English interpreting, so that we can facilitate you in attending this event. Contact: rmackenz@tcd.ie 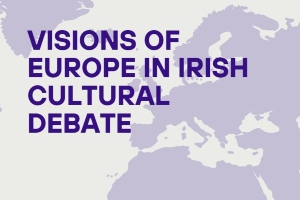