Peace, Humanity and Saving Lives in the Middle East

For his contribution to peace – not simply the absence of war, but genuine peace, founded on freedom, independence, national sovereignty, equality, human rights, and a fair and equitable distribution of resources – the Standing Commission of the Red Cross and Red Crescent unanimously agreed to award Mohammed Al-Hadid the Red Cross and Red Crescent Prize for Peace and Humanity.

Dr Al-Hadid played a leading role in the Movement’s operations during the 1990–1991 Gulf War, when his knowledge of different cultures, traditions and languages enabled him to reach out to the parties. His determination and his contributions earned him deep appreciation within the Movement, and friends in National Societies the world over.

As a member and later as chair of the Standing Commission, he made it his priority to resolve the Movement’s emblem issue, as a step towards a more unified Movement. In 2005, Dr Al-Hadid persuaded the Magen David Adom in Israel and the Palestine Red Crescent Society to meet for the first time. They did so under the auspices of the JNRCS and signed a Memorandum of Understanding in November that year. This paved the way for adoption of the Third Protocol (on the red crystal emblem) at the 2005 Diplomatic Conference. Under Dr Al-Hadid’s skilful chairmanship, the challenging 29th International Conference of 2006 recognized the Magen David Adom in Israel and the Palestine Red Crescent Society, and admitted them to the Movement, resolving what had long seemed an insoluble problem. Dr Al-Hadid continues to promote implementation of the Memorandum of Understanding and to encourage peace and harmony in the Movement, by helping parties find common ground in the Middle East, in Cyprus and in other difficult contexts.

He has enabled Palestinians from the West Bank to travel to Jordan for specialist treatment, facilitated the delivery of medicines and relief supplies to Gaza and the occupied territories and negotiated with governments to lift blockades or release humanitarian workers.

Under Dr Al-Hadid’s guidance, the Jordan National Red Crescent Society has helped Jordan host an unprecedented number of refugees, thereby contributing to stability in the region. 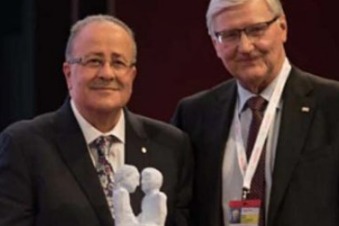