A talk by Dr Luke Warde (TCD French Dept) as part of the School of Languages, Literatures and Cultural Studies Research Seminar Series in association with Trinity Long Room Hub.

A reading of Louis-Ferdinand Céline through the concept of trolling. A relatively new phenomenon, trolling denotes an attempt to elicit a negative response in a chosen target via deliberate provocation or incitement. While inextricable from the online social media platforms that have facilitated its emergence as a discursive mode, trolling is dependent on rhetorical strategies that are hardly new: irony, self-referentiality, effrontery, aggression etc. Trolls seek to cultivate a brand around the antipathy they delight in triggering. contending that Céline attempted to do just this in the postwar period, more specifically in the series of interviews he conducted at Meudon in the last decade of his life he argues against some recent scholarship that claims that Céline attempted to regain, by expressing contrition, a sympathetic audience following his condemnation for having published a series of egregiously antisemitic pamphlets. Rather, he suggests that he sought to instrumentalize his notoriety for his own advantage; some readers, he likely reasoned, are drawn to him because, not in spite of, his infamy. His argument draws on a body of recent writing on the relationship between humour, new media and far-right politics.

Luke Warde recently received his doctorate in French from the University of Cambridge. He is currently working on a monograph, provisionally entitled ‘Of (un)Sound Mind: Louis-Ferdinand Céline and the Phenomenology of Reading and Perception’, which offers a radically new interpretation of Céline’s works through sound studies and contemporary cognitive and neuro-science.

Please indicate if you have any access requirements, such as ISL/English interpreting, so that we can facilitate you in attending this event. Contact: ruthnerc@tcd.ie 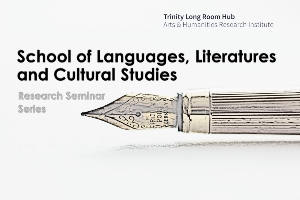