TLRH | The Death of the National Museum of Brazil: Slavery Heritage on the Edge

An online lecture as part of the Out of the Ashes Lecture Series, with Professor Ana Lucia Araujo, Howard University, Washington.
Book here

This lecture will be delivered in English

This lecture examines the history of the National Museum in Rio de Janeiro, Brazil, which was destroyed by fire in September 2018. Araujo explores the connections between the museum's building and the formation of its collections associated with the history of the Atlantic slave trade and slavery in Brazil, the country that imported the largest number of enslaved Africans (nearly five million) during the era of the Atlantic slave trade. The museum housed the oldest collection of African artifacts in the country. Several of these artifacts were given as gifts to the Portuguese Prince Regent (who later became king) by the king of Dahomey, in the context of transactions to facilitate the trade in enslaved Africans between Brazil and the West African Kingdom of Dahomey. In the past two decades, the museum, like a few other Brazilian institutions, was investing in reorganizing its exhibitions to bring to light the links between Africa and Brazil, a dimension that until recently remained absent from Brazilian museum institutions.  Araujo shows that the destruction of the museum as a result of federal government's neglect reveals a reality that affects many other big and small museums whose collections derive from the country's long history of slavery.

The event will also feature a short response to the lecture from Lar Joye, Port Heritage Director at Dublin Port,  former Chair of the Irish Blue Shield, and a member of the board of the Irish Museum Association.

About the speaker
Ana Lucia Araujo is a full Professor of History at the historically black Howard University in Washington DC, United States. She holds a dual PhD in History/Social and Historical Anthropology from Université Laval, Canada, and École des Hautes Études en Sciences Sociales, France (2007) and a PhD in Art History from Université Laval, Canada. (2004). Her recent single-authored books include Slavery in the Age of Memory: Engaging the Past (Bloomsbury Academic, 2020), Reparations for Slavery and the Slave Trade: A Transnational and Comparative History (Bloomsbury Academic, 2017), Brazil Through French Eyes: A Nineteenth-Century Artist in the Tropics (University of New Mexico Press, 2015). She is a member of the International Scientific Committee of the UNESCO Slave Route Project. She also serves on the Board of Editors of the American Historical Review (the journal of the American Historical Association) and the editorial board of Slavery and Abolition. She is a member of the executive board of the Association for the Study of the Worldwide Diaspora (ASWAD), the editorial review board of the African Studies Review, and the board of the blog Black Perspectives maintained by the African American Intellectual History Society.  Currently, she is working on two book projects: Human in Humans in Shackles: An Atlantic History of Slavery in the Americas (under contract with the University of Chicago Press) and The Gift: How Objects of Prestige Shaped the Atlantic Slave Trade and Colonialism (under contract with Cambridge University Press). She just finished Museums and Atlantic Slavery, a short-format book to be published in the Spring 2021 by Routledge in the series Routledge Museums in Focus.

The Out of the Ashes lecture series is generously supported by Sean and Sarah Reynolds. 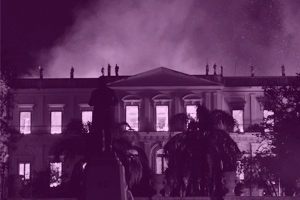