Emily French, a nurse from a middle class Roscommon protestant family, embarked for the port city of Ningbo in China in 1888, following her medical training in London. She would remain in China for the next twenty-six years, marrying an Irish doctor, Charles de Burgh Daly, and having two children. Emily was one of many Irish professionals who lived and worked in China in this period, serving the interests of British informal empire in treaty ports, customs posts, and commercial concessions. This talk will reveal the professional world of Irish sojourners in late-Qing era China, and the personal and occupational networks that tied this distant Irish community together and linked it to Ireland. It will draw out the motivations which attracted Irish professionals to China, particularly their self-identification as empire builders, making a claim to Irish imperial nationhood. It will also explore the ways in which an Irish community was sustained, despite its impermanent and highly mobile membership. What emerges from narratives like Emily’s is a novel perspective on Ireland’s positioning and role within the British Empire, and a sense of the importance of imperial connections to late nineteenth century Irish society.

Dr Loughlin Sweeney is an assistant professor at the newly-established John Endicott College of International Studies in Daejeon, South Korea, and a visiting scholar at the University of Edinburgh. His first book, Irish Military Elites, Nation and Empire 1870-1925 was published in 2019 with Palgrave Macmillan. He is a historian of Ireland’s connections to the overseas British Empire in the nineteenth and twentieth centuries, and is currently working on a project tracing Irish professional networks in East Asia in the late nineteenth century. 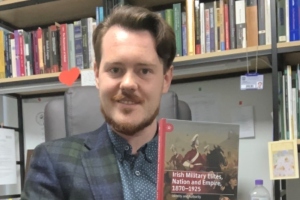