Behind the Headlines: What’s going on in…Hong Kong?

On October 1 as Beijing celebrated the seventieth anniversary of the foundation of the People’s Republic of China, pro-democracy demonstrations in Hong Kong intensified. This was the 184th day of action by the Anti-Extradition Law Amendment Bill Movement. Despite the Extradition Bill being recently rescinded, the protests show no sign of stopping. You might be one of the Google users who made ‘Hong Kong’ among the most searched endings to the Google question ‘What’s going on in…?’ Our latest Behind the Headlines discussion seeks to answer that question, focusing on the escalating protests in the former British colony and exploring Hong Kong’s turbulent relationship with China.

Register here
Padraig Gallagher lived in Hong Kong for 10 years during the 90s and more recently from 2007 - 2009.  He is a former Managing Director Global Banking & Markets with HSBC in Hong Kong. He will look at the economic impact of the events of recent months and will also look at the reaction of the different sections of the Hong Kong business community to the present situation. He will also look at the international reaction to the crisis, especially from corporates with operations in Asia / Hong Kong.

Dr Isabella Jackson is an Assistant Professor in Chinese Studies at Trinity’s School of Histories and Humanities. She will look at how Beijing has framed the current protests in the context of foreign interference, and how this is a legacy of China’s century of national humiliation – the period of imperialism by western powers in China.

Dr Peter E Hamilton is an Assistant Professor of Modern Chinese History in the Department of History, Trinity College Dublin. He will provide an historical overview of the 1980s-1990s handover process that led the United Kingdom to return this former colony to China as a Special Administrative Region on July 1, 1997. He will explain how the handover process defined the ‘One Country, Two Systems’ policy and set terms for today's conflict.

Dr Chung Kam Kwok is a Research Fellow based in the School of Linguistic, Speech and Communication Sciences, Trinity College Dublin, researching in the area of language and identity. As a Hong Kong native, he will talk about the motivations of a generation of protesters trying to voice Hong Kong’s frustration at Chinese control in the region. Looking at the intensifying protest movement, he will ask how will Hong Kong become governable again? 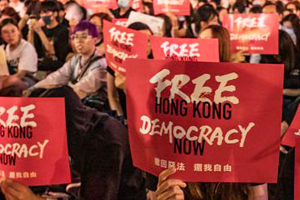