'Europe At Sea' Film Screening and discussion with the Director

A film screening of the documentary film “Europe At Sea”, written and directed by award-winning filmmaker Annalisa Piras followed by a panel discussion on migration and European security policy with Annalisa Piras, Bill Emmott, and Gillian Wylie.

The film obtained unprecedented access to High Representative and Vice-President of the European Commission Federica Mogherini, who served as EU foreign and security policy chief at a pivotal moment in European history. Europe at Sea contains never-before-seen footage of the migrant crisis and offers a unique insight into the first joint EU naval fleet in the Southern Mediterranean Sea, Operation Sophia.

Annalisa Piras is a London-based Italian film director, producer and journalist. She is currently the director of Springshot Productions, an independent production company which specialises in documentaries. In 2015 Annalisa Piras directed “The Great European Disaster Movie”, the first ever film on the EU crisis from an international point of view. The film, produced by BBC and Arte among others, won the prestigious German CIVIS media prize in the information category.

The screening will be followed by a panel discussion on migration and European security policy with Annalisa Piras, Bill Emmott, and Gillian Wylie. Bill Emmott, who acted as a consultant for “Europe At Sea” is the former editor of The Economist. In 2013, together with Annalisa Piras, he co-founded an educational charity called The Wake Up Foundation. Gillian Wylie is assistant professor of International Peace Studies in Trinity College Dublin’s School of Religion. Her research interests include issues relating to human trafficking and the securitization of migration 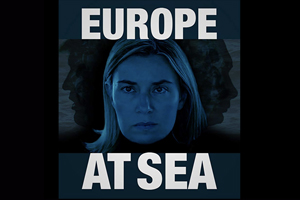