When was Dublin Baptized .... and How is it Faring Today?

A panel discussion as part of the 'Trinity and the Changing City' Series.

The story of Christianity in Dublin, and that of Christianity and Dublin, as it emerged over the centuries is a fascinating one. While Ireland is still one of the most Christian countries in Western Europe, many ask ‘will Dublin be Christian in 2030?’ The speakers at this session will explore the expression of Christian faith in Dublin both historically, and in the twenty-first century, with contributions from both academics and contemporary practitioners. Speakers will include Salvador Ryan, Professor of Ecclesiastical History at St Patrick's College Maynooth, who will speak about Dublin Catholic culture from 1850-1950, pondering how “Catholic” Dublin Catholicism was in that period; Patsy McGarry from the Irish Times and Dr Faínche Ryan, School of Religion at Trinity. The event will be chaired by Dr Con Casey, Associate Director of the Loyola Institute at Trinity. 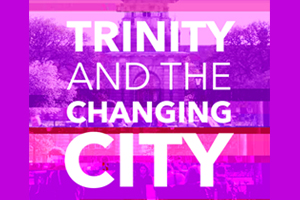