Cromwell, Priestcraft and the "Deluded and Seduced People of Ireland”

A lecture by Professor John Morrill (Cambridge) as part of the Trinity Centre for Early Modern History Seminar Series.

The Trinity Centre for Early Modern History promotes understanding of the culture, society, economy, religion, politics and warfare of early modern Europe. The Centre organises seminars, conferences and public lectures on the early modern history of Ireland, Britain and Continental Europe, as well as on relations between European and non-European states and cultures.

John Morrill is Professor of British and Irish History at Cambridge, where he has been based since 1975. He is also a familiar figure in Trinity, where he is an honorary fellow and has been involved in a number of research projects, including the 1641 depositions project. He is the General Editor of a new multi-volume (and online) edition of all the recorded words of Oliver Cromwell. John is a visiting research fellow at Trinity Long Room Hub from the 3rd of September to the 2nd of October, 2019. 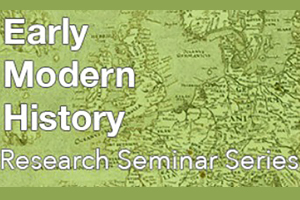