A conversation hosted by Feargal Whelan, with Nora Masterson and Mouth on Fire Theatre Company as part of the Samuel Beckett Summer School.

Beckett’s apartment in Boulevard Saint-Jacques in Paris overlooked the Santé prison, and he described both his distress at hearing the cries of the inmates from his living room and his attempts to signal to them, using a small mirror. His writing explores themes and scenarios of confinement, incarceration, and loss of control or agency. In 1953, months after its premiere in Paris, Waiting for Godot was performed in Wuppertal prison in Germany, and four years later it was staged in San Quentin State Prison in California, with both productions making a powerful impression on some of the prisoners.

This discussion will examine the effect of Beckett on prisoners through performances of his work with the help of Nora Masterson, widow and collaborator of Rick Cluchey, founder of the San Quentin Drama Workshop, and Marcus Lamb & Cathal Quinn, of Mouth on Fire, who continue to perform Beckett in the Irish Prison system. The discussion will be moderated by Feargal Whelan.

The Beckett Summer School 2019 is pleased to partner with Kilmainham Gaol, and is extremely grateful for the support of the OPW in making this event happen at one of Ireland's most powerful and significant historical sites.

Advance booking is highly recommended, as space in the Courthouse is limited. Please use the front entrance to Kilmainham Gaol; arrival at 6:45 PM is recommended.

Tickets may be reserved for free. If you wish to make a contribution to future Beckett Summer School activities, please select "donation" on the ticketing options; 100% of all proceeds from donations go to the tenth anniversary Summer School (2020) public programme.

Biographies
In her twenty year partnership with Rick Cluchey, Nora Masterson played the roles of wife, mother, producer and actress. As Artistic Director of the Irish Theatre Arts Center in West Holly wood, she hosted weekly readings of plays by established and emerging Irish writers, and provided a platform for productions of the San Quentin Drama Workshop including “Beckett’s Women”, “Krapp’s Last Tape” and the recording of “Murphy” with Fionnula Flanagan and Colm Meaney as narrators. She is committed to continuing Rick’s work and is currently coordinating his archive, and developing Rick’s play “Sam and Rick”, which chronicles the story of Rick’s collaboration and friendship with Samuel Beckett.

Cathal Quinn is a voice coach, director, writer and actor. He has directed over twenty of Beckett’s works for Mouth on fire, and has toured them in Ireland, the UK, Russia, Japan and Spain. Cathal has written and directed Yeats Besotted (Bewley’s Theatre) and dramatized The Balld of Reading Gaol (Mountjoy Prison). He is Head of Voice at The Lir, Trinity College. He has also written plays about Wilde, Yeats, Keats and World War I, and has performed Keats and Wilde.

Marcus Lamb is a member of Mouth on Fire Theatre Company, set up in 2010 to perform the works of Irish Nobel Laureate Samuel Beckett. The company's aim is to bring Beckett to the general public and to make his work accessible to everyone and have brought the works of Beckett to Tokyo, Belgium and Russia. In 2015 he performed Beckett's 'The End,' for the inmates of both Mountjoy and Portlaoise prisons, while in 2018 he performed ‘First Love’ to the female inmates of the Dóchas centre at Mountjoy. He also played Lucky in Gare St Lazare Players production of 'Waiting For Godot' in 2015 and has toured with Druid Theatre company. He is well known for his TV and film work having played amongst others Patrick Pearse and Eamonn De Valera on screen. 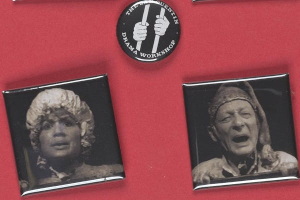