Abstract
This talk will look at the ways in which the metalinguistic of MTV gave a new rhythm and configuration to the narration in Isabella Santacroce's novel Destroy. In this narrative a "spot-pourrì" of images and brands replace descriptions, and flashes of significance are confined within few free-running lines hyper-tuned and overloaded with elements of the consumer mythology. Isabella Santacroce's production can indeed be framed according to what Antonelli defined the Ipermedia language, both intended as an average mainstream language, as a language refashioned by mass media and as a language able to move across media.

Biography
Martina Mendola is a second year PhD in the Italian department of the School of Languages, Literatures and Cultural Studies at Trinity College, Dublin. She is supervised by Dr Clodagh Brook and Dr Giuliana Adamo. Martina holds a Bachelor Degree in Modern Literatures (University of Palermo), and a Master’s in Comparative literatures (University of Turin), together as professional certs in translation and exhibition designer. Her current doctoral research focuses on the process of Identity formation in coming-of-age stories in contemporary Italian literature.

Abstract:
This presentation will discuss some of the challenges relative to the programmatic modelling of the Old Irish verb, undoubtedly the most complex subsystem of Old Irish (c. 7th-9th centuries A.D.) grammar. A central concept in (computational) morphology---the linguistic subdiscipline studying word formation---is a word's stem or base, the 'common denominator' across the different shapes that a word may assume. During Dorus’s PhD research, it gradually became clear to me that a verb stem in Old Irish is a non-trivial concept, hugely complicating a rule-based implementation. Apart from touching on some computational challenges and (alternative) ideas and solutions, the talk will address the envisaged practical applications of my research, mainly in the realm of digital and historical lexicography.


Biography:
Theodorus (Dorus) Fransen completed undergraduate and postgraduate degrees in Celtic Studies and Linguistics at Utrecht University (The Netherlands) between before moving to Ireland, where he obtained an M.Phil. in Speech and Language Processing from Trinity College Dublin in 2013. He was awarded the prestigious Trinity Ussher Fellowship (2014-2017) and was an Irish Research Council-funded Postgraduate Fellow in the Trinity Long Room Hub in the academic year 2017-2018. He submitted his doctoral thesis in 2018 entitled 'Past, present and future: Computational approaches to mapping Old and Modern Irish cognate verb forms'. While his current focus is on computational morphology for Old Irish verbs, he hopes to explore new, digital avenues to facilitate systematic investigation of linguistic developments between Old and Modern Irish in a future research project. His publications include ‘Automatic morphological parsing of Old Irish verbs using finite-state transducers’ in Leeds Working Papers in Linguistics and Phonetics and ‘Automatic morphological analysis and interlinking of historical Irish cognate verb forms’ in Proceedings of the Chronologicon Hibernicum Workshops 2016-2017, Maynooth (both expected to appear in 2019). Theodorus’s research interests are highly interdisciplinary. Apart from computational morphology and historical Irish linguistics, he is interested in the phonology-orthography interface, Natural Language Processing methods to deal with linguistic variation in historical texts, and digital lexicography, mainly in the Irish context.

Abstract:
This presentation will focus on a few 'case studies' of solitary figures in a selection of novellas from the German romantic era. Specifically, it will use Speech Act Theory to examine the ways in which these figures' practice of solitude is still expressed in terms that betray a need or desire to perform their seclusion for an audience and in a way that relies on and at times satisfies the ideological understandings of the society they purport to have left behind.

Biography:
Jason is PhD student in the Germanic Studies department. Having come from an undergraduate background of Linguistics and German Literature, he is interested in the ways in which the two disciplines are intertwined. Specifically, his research seeks to explore the ways in which social performativity is expressed through language and communication in general. His main area of focus is in the novellas and Kunstmärchen (modern fairy-tales) of the German Romantic era, but further areas of interest include contemporary Greek cinema and Central European cultural studies.

About the series
The Linguistic Lunch series is organised by School of Linguistic, Speech and Communication Sciences seeks to feature postgraduate researchers working on any linguistic subdiscipline (applied linguistics, historical linguistics, neurolinguistics, deaf studies, etc.). The series consists of one hour seminars where postgraduates can present on their projects in short, 11-minute lightning talks aimed at an audience of their peers and other interested parties. These seminars are a great forum for getting experience speaking about your research in an informal and friendly environment, and for meeting some of the other students in the college's research community. 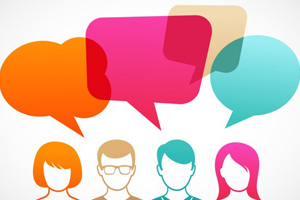