Behind the Headlines: Does Race Matter?

From the abolition of slavery to the civil rights movement, and post-apartheid to current day, race and racism has manifested in different ways throughout the 20th and 21st century. In this latest Behind the Headlines discussion we ask, Does Race Matter?

Our panellists will look at why racial inequality persists after the abolition of slavery and how racism continues to evolve under different guises; the role of the Irish Americans in race relations and the connection to Ireland’s civil rights movement; the experience of institutionalised racism in higher education; and online toxic hate speech and digital racism.

Professor Premesh Lalu will explore how race persists as a matter of grave consequence given its threat of uncanny returns and if ignored will prove devastating for the future of our planet. Premesh Lalu is currently a Visiting Research Fellow at the Trinity Long Room Hub in association with Trinity’s School of Creative Arts, focusing on his research project ‘The Practice of Post-Apartheid Freedom.’ He is the Director of the Centre for Humanities Research (CHR) at the University of the Western Cape (UWC). He has lectured internationally and locally in South Africa on a broad range of themes, including histories of colonialism and apartheid, art and history, digitization of archives, and the humanities after apartheid. Lalu is a board member of the Consortium of Humanities Centers and Institutes, former chairperson of the Handspring Trust for Puppetry in Education, and former trustee of the District Six Museum in Cape Town, South Africa.

Professor Eugenia Siapera will explore digital racism, from the organised racism of extreme right and white supremacist groups to the everyday racism (re)produced by people who do not understand themselves as racist. Eugenia Siapera is Professor and Head of the School of Information and Communication Studies at University College Dublin (UCD). Her research focuses on digital media and hate speech, covering both racism and misogyny. She has recently (2018) completed a project on Tracking and Monitoring Racist Hate Speech in Social Media, funded by the Irish Research Council and the Irish Human Rights and Equality Commission. Along with Debbie Ging she has co-edited a special issue on Online Misogyny for the journal Feminist Media Studies and a book on Gender Hate Online (2019, Palgrave)

Professor Daniel Geary will look at how the Irish and Irish Americans identified with and against African Americans by looking at the example of Northern Irish rights campaigner Bernadette Devlin’s trip to the US in 1969. Daniel is the Mark Pigott Associate Professor in American History at Trinity College Dublin. His research interests include the intellectual, political, and cultural history of the twentieth-century United States; the development of ideas about race and ethnicity; and the transnational history of civil rights movements and of white nationalism. He is currently working on several projects including a co-edited volume on the history of white nationalism in the U.S., Britain, and formerly British colonies from Enoch Powell to Donald Trump; a book on the rise and fall of the concept of racial “integration”; and a study of connections between the U.S. and Northern Ireland during the civil rights era.

Sahar will discuss racism in higher education in Ireland, and the experience of navigating a system and academia as a scholar with the visible baggage of race. Sahar Ahmed is a PhD student in Trinity’s School of Law, researching the right to freedom of religion within the international human rights legal system and Islamic jurisprudence. Sahar practiced as a commercial and corporate barrister in Lahore, appearing before the courts as an Advocate of the High Courts of Pakistan, covering a wide range of contentious and quasi-contentious matters. Her research thesis examines whether a reinterpretation of the controversial Islamic jurisprudence on the right to freedom of religion can address its apparent disconnect with the right as it exists in the international human rights legal regime.

The Trinity Long Room Hub 'Behind the Headlines' series is supported by the John Pollard Foundation. 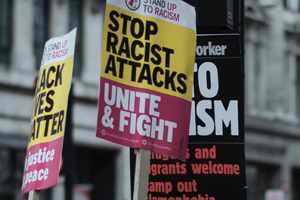