Abstract:
The discourse on consciousness is very fraught. This is not simply a way of saying that no consensus has emerged about how to explain it. This is not even simply a way of saying that no consensus has emerged about how to attempt to explain it. The term ‘consciousness’ itself remains highly contested, even while some insist that its meaning is incontestable. Some say consciousness exists intrinsically: it is more ontologically robust than anything else. Others say that consciousness doesn’t exist at all. Some say science as we know it can’t explain consciousness. So much the worse for the concept of consciousness? So much the worse for science as we know it? The very contours of the disagreement are not salient. Conflicting schools of thought mischaracterize one another into absurdity. Nothing falls along disciplinary lines. Radical suggestions as likely come from within the sciences as from without. The representatives of nearly all the positions lay claim to ‘naturalism’, which then itself becomes a contested term. To read this as cause for pessimism would be to make a mistake. The field is confused and confusing, but not empty. Insights abound, and even the most credibility-straining theories have valuable lessons to offer. This presentation will provide a simultaneously descriptive and prescriptive survey of current trends and future directions in the field. Some suggestions to clarify and organize the debate are offered, and a pluralistic research program is sketched. This all reflects and – it is hoped – encourages a cautious, perhaps messy, but nonetheless well-founded optimism about the prospects for studying consciousness.

About the speaker
Francis Fallon is an Assistant Professor of philosophy at St John’s University in New York. He studied Philosophy and History at Trinity College Dublin (BA, Mod.), Intellectual History at the University of Cambridge (MPhil), and Philosophy at Lancaster University, UK (PhD).  He works primarily in the area of philosophy of mind and (cognitive) science, especially consciousness.  He is a member of the board of the directors of the Long Island Philosophical Society and a consulting member of the Accelerating Research on Consciousness project, in association with the Templeton World Charities Fund. 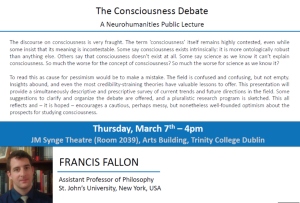