Bialowieza or How to Retell Polish History

The history of Bialowieza mirrors a long practice, beginning with Lithuanian kings from the Jagiellonian dynasty in the 14th century, of cutting the wood and clearing the forest for hunting. Described by the prophetic, romantic, Polish-Lithuanian poet Adam Mickiewicz in Pan Tadeusz [Sir Thaddeus, or the Last Lithuanian Foray: A Nobleman’s Tale from the Years of 1811 and 1812 in Twelve Books of Verse], an epic written in 1834, it is one of the greatest signs of environmental consciousness expressed in the national literature. It includes a fragment of description of the deepest heart of the forest that gathers and preserves all species and where humans cannot enter. This so-called “motherland of woods” resembles a strict nature reserve – however, in comparison with our times, Mickiewicz’s sanctuary exists only in the wild. Why even the most symbolic, entangled with the national history landscape as Bialowieza cannot help to foster the protection of nature? This question cannot be reasonably answered but we can try to retell the history from the perspective of the forest and its non-human inhabitants. Some would call it the environmental history and some - like me - would advocate for changing the national discourse of telling history in general.

In contrast to the existing problem of logging and other human practices disturbing vulnerable Bialowieza’s ecosystems and preventing the authorities from extending the borders of national parks mainly on the Polish side (despite the UNESCO heritage list that includes Bialowieza since 1979), I take the militant discourse that ascribes national identity to the trees as an example. In the patriotic, historical narratives, the forest is a soldiers’ ally, a partisans’ hideout, a hero of songs from the First and Second World Wars, and a witness to history (the forest guerrilla survived even the war, transforming into the so-called anti-communist – the last partisan hid in the forest until 1963). The cultural bond with the forest derives from the darkest history of the first settlers in Eastern Europe and environmental conditions that they found here. Thus, the traditions of nature conservation are inextricably linked to the history of the Polish statehood.

Dr Anna Barcz is the Trinity Long Room Hub Marie Skłodowska-Curie Cofund Fellow (2018-19). She is also the author of Ecorealism: From Ecocriticism to Zoocriticism in Polish Literature (Katowice 2016), Animal Narratives and Culture: Vulnerable Realism (Newcastle upon Tyne 2017) and co-author and editor of Animals and Their People: Connecting East and West in Cultural Animal Studies (Leiden 2018). Her research concentrates on socio-cultural representation and perception of animals and environment. 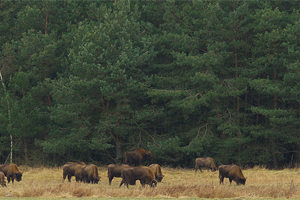