Why Transnational History Matters: The Case of German Atrocities, 1914

A lecture by Prof Alan Kramer (TCD) and Prof John Horne (TCD) as part of the International History Seminar Series in association with the Centre for War Studies.

In retrospect, the 1990s was a European decade. The end of the Cold War and reunification of much of Europe opened up new perspectives on the recent history of the continent and new ways of writing about it at a transnational level. John Horne and Alan Kramer researched a book (published in 2001) on one of the most controversial episodes of the First World War, the atrocities committed during the German invasion of Belgium and northern France in 1914, as an explicitly European project. The 2010s is a different decade. Their book has been attacked in Germany by an historian writing in a national vein who has gained some support in the wider historical community and been taken up by the far right press. All historical scholarship is open to debate and revision and in ways that concern the wider public. But is there the danger, in an era of nationalist populism and political antagonism, that the scholarly and transnational history of Europe may become a target both within and beyond the profession? That is the question that John Horne and Alan Kramer will discuss through the history of the reception of their own book.

Alan Kramer is Fellow and Professor of European History, TCD, and Member of the Royal Irish Academy.

About the series
The International History Seminar Series is a lecture series that promotes research and scholarship in the field of modern global history. It invites lecturers working on a wide variety of geographic and topical fields, including (but not exclusively) European, Irish, U.S., Middle Eastern, Asian, and global history. It seeks to examine current events from a historical perspective in order to better understand our current world. 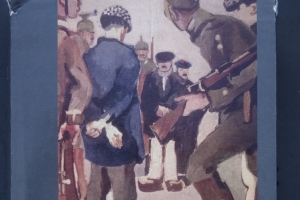