In Conversation with Catherine Corless

The Trinity Long Room Hub is delighted to host this special ‘In Conversation’ with Catherine Corless who will be interviewed by Professor of Genetics at Trinity College Dublin, Aoife Mc Lysaght.

As a family historian researching in her own time and without any university affiliation, Catherine Corless has worked on a particular, and shameful, aspect of Irish history, namely the “Mother and Baby Homes”. Her work in gathering information on the institution in Tuam, Co. Galway, has revealed patterns of the mistreatment of individuals, both adult women and their infants, under de facto incarceration. Though local people may have been aware of the conditions, the absence of records and hard data allowed the hierarchy of these institutions and the state to ignore or deny the extent or even the existence of the mistreatment and incarceration. Catherine Corless meticulously collected records of births, deaths and burials, which ultimately lead to the uncovering of a mass grave in the location of the septic tank system. This meant that the shameful history of the institution could no longer be ignored.

Catherine Corless’s work required careful collection and cross-referencing of records. When she requested records from the Western Health Boards and from the Bon Secours Sisters (who ran the institution) she was told that they had none. She was informed that because she had no university qualification or affiliation the local county council were also unwilling to give her the records she needed. Ultimately, she requested records of deaths at the home from the Galway registry. There were 796 such deaths but no burial records.

She has shed light on this Irish institution, while establishing an all too familiar pattern that was not unique to Tuam. Her work has been key to forcing the recognition of the mistreatment of innocent individuals in these institutions and as such is an important agent of social change in Ireland.

Catherine Corless is a native of Tuam, Co. Galway, where her work as a family historian has uncovered the dark history of the Bon Secours Mother and Baby Home in Tuam. Catherine has previously been awarded the Bar of Ireland Human Rights Award (2017) in recognition of "exceptional humanitarian service" for her investigation into the Bon Secours Mother and Baby Home, and was one of the Rehab Group People of the Year Award recipients in 2018. President of Ireland, Michael D Higgins commented that Catherine "has demonstrated not only courage and perseverance but a remarkable commitment to uncovering the truth, to historical truth and to moral truth. All of us in this republic owe a debt of gratitude to Catherine for what was an extraordinary act of civic virtue". 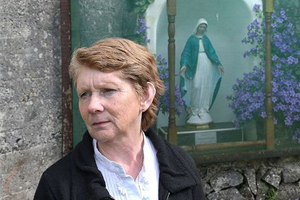