A lecture by Prof Shamil Jeppie (University of Cape Town) as part of the 'Out of the Ashes' lecture series.

In the political crisis in northern Mali in late 2012 through to early 2013 Timbuktu was occupied by rebels who more-or-less ran the town for a number of months until French-led forces compelled their withdrawal. It was reported that during their last days the insurgents destroyed thousands of manuscripts from the town’s main archive-library. This act of vandalism drew a huge outcry of revulsion and condemnation. However, the extent of the damage and destruction was exaggerated; or, at least, we are uncertain of the extent of the loss of manuscripts. Furthermore, a number of family collections with thousands of items in hundreds of metal crates had been moved unnoticed from the town to the capital, Bamako, some 800 km away. A large part of an historic town’s archive had been relocated piece-meal over a number of weeks; sent by donkey-cart to river-boats on the Niger River and then by local taxis on the narrow national road under cover of night or other camouflage.

The crisis and the apparently secret transfer of the manuscripts have been sensationally covered in the media and recent journalistic works. But it led me to think of the longer-term history of the movement of books in the region (from at least the 1400s) which, after all is part of an ecological zone that has a long history of nomadism. It also led me to reflect on other examples of book destruction, other examples of the transplant of books under various types of stressful conditions; whether due to war or natural disasters. The events and narratives around Timbuktu were thus a useful way to begin to think of a not unfamiliar case of mobility in relation to books and archives, although it appears it is or has seldom provided an opportunity for reflection. This brings to mind March Bloch’s words to the effect that “for the historian there is nothing like a good catastrophe”

Register here
About Shamil Jeppie
Shamil Jeppie is Associate Professor of History at the University of Cape Town and Director of the Institute of Humanities in Africa (HUMA). His research and publications focus on social and cultural history in South Africa and West Africa, and he is founder of the Tombouctou Manuscripts Project, which explores the formation of a culture of collecting in Timbuktu. His books include Language, Identity, Modernity: The Arabic Study Circle of Durban (2007), and the co-edited volumes The Meanings of Timbuktu (2008), Muslim Family Law in Sub-Saharan Africa: Colonial Legacies and Post-Colonial Challenges (2010), and Toward New Histories for South Africa: On the Place of the Past in Our Present (2004).

The Out of the Ashes lecture series is generously supported by Sean and Sarah Reynolds.
Find out more about the series here 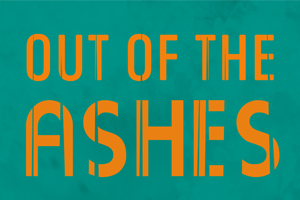