The Banking Crisis – A Decade On

2018 marks ten years since the controversial guarantee of the Irish banks by the government, which would lead to the €64m bailout of the banks, and was followed by an unprecedented collapse in property prices, the loss of sovereignty in the form of the 2010 bailout of Ireland by the IMF/ECB/EU ‘Troika,’ and deep and prolonged economic recession.

Ten years on, as part of the Trinity Long Room Hub ‘Behind the Headlines’ public discussion series, a distinguished panel will examine the changes wrought in the Irish financial, business and cultural landscape by those events and will ask: has enough changed?

Joan Burton TD
Joan Burton is now on her fifth term as Labour Party TD for Dublin West.  She was the Labour Party spokesperson on Finance from 2002 to 2011 and was elected Deputy Leader in 2007. In September 2008 she was a major critic of the bank guarantee and the subsequent legislation.  Deputy Burton served as Tánaiste and leader of the Labour Party from 2014 to 2016 and has held a number of ministerial roles, most recently as Minister for Social Protection from 2011 to 2016.   In the current Dáil she is again Labour’s Finance spokesperson and she serves on the Budget Oversight Committee.

Simon Carswell, Irish Times correspondent
As Finance Correspondent for the Irish Times, Simon Carswell covered the banking crisis from 2007 to 2012; this work earned him the National Journalist of the Year award from the National Newspapers of Ireland in 2011.   He is the author of two books: Something Rotten: Irish Banking Scandals (2006) and Anglo Republic: Inside the Bank That Broke Ireland (2011).   He was the Irish Times Washington Correspondent from 2013 to 2017 and is a regular contributor to radio and television.

Antonia Hart, a PhD candidate in Trinity’s School of Histories and Humanities
Writer Antonia Hart’s current research Irish Women in Business, 1850-1922 funded by an Irish Research Council Government of Ireland Postgraduate Scholarship 2016-2019, looks at Irish women running businesses in the period just after the Famine up to the foundation of the State. Her fiction, non-fiction and short memoir pieces have been published in magazines and anthologies, and she is the author of Ghost Signs of Dublin (2014).

Dr Philip Coleman, Associate Professor in Trinity’s School of English
Philip Coleman is a specialist in American literature with a particular interest in twentieth-century and contemporary poetry and short fiction. He is also Trinity’s Registrar of Chambers, an annual officer appointed by the Provost to allocate campus rooms to students.

The Trinity Long Room Hub Behind the Headlines series is supported by the John Pollard Foundation.
Register here 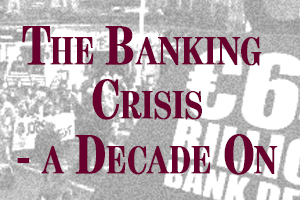