It is striking to realize that only thirty-five years after the death of Mario Praz, his importance as one of the founding fathers of Comparative Studies has almost been forgotten by a large part of the international academia: therefore, it occurred to us that it is urgent to reflect and discuss the importance of his work and his legacy. This conference aims to cast a light on the fertile influence that his works had and still have in the field of contemporary Comparative Studies.

Why it is so important to remember and talk about Mario Praz in 2018? As Giorgio Ficara pointed out in the introduction of Bellezza e Bizzarria, a collection of Praz’s essays, in a moment of cultural paucity, it is crucial to rediscover the eccentricity and the anti-normative approach of Mario Praz to literature and art. His groundbreaking studies on interior decoration and art are still considered essential lectures for academics approaching the field of Comparative Studies. Praz, in fact, theorized the influence of our personality and our cultural background on our aesthetical taste when it comes to shape the environment around us.

As this conference aims to show, Mario Praz is the precursor of the idea of “interdisciplinarity”, a concept that is now fundamental in European academia and beyond. Praz made an essential contribution by creating a new approach to art and literature; our purpose is to show how his legacy is still real and how much his studies contributed to the development of a new discipline. This conference will be an occasion to celebrate the life and the works of an Italian intellectual too often ignored by the academic culture which often tends to forget its origins.
Among all the questions we chose to address, we want to put forward the followings: in what ways do his works still have an influence on comparative studies? Which echo of his thought can be found in contemporary literary criticism? In what way has his heritage been transmitted after his death?


Programme of the day

Full-Professor Mauro Pala (University of Cagliari), The Remain of the Gothic: Praz Revisited from a Contemporary Critical Perspective: Professor Pala will examine the legacy of Praz from a contemporary literary perspective; this lecture aims to give the audience a sense of the influence that the studies made by the Italian critic still have on our culture.

Full-Professor Mario Domenichelli (University of Florence), Praz, T.S. Eliot, Montale: Secentismo e Marinismo, The Metaphysical Poets, The Waste Land, ‘Arsenio’ and Cuttlefish Bones: Professor Domenichelli will use a comparative approach in order to show the relationship between Praz and the poetry of T.S. Eliot and Eugenio Montale. Mario Praz was the one that introduced Montale to the work of Eliot, as the Italian poet later admitted.

12-13
PhD candidate Paola Orrù (Trinity College Dublin), Praz Unknown: The Juvenile Production and Iphigenia: Paola Orrù, will give an overview of the unpublished juvenile production of Mario Praz. Paola’s speech will mostly focus on the text Iphigenia, a short poem set in the underworld and centered on two female figures: Iphigenia and Helen of Troy. The speech will be followed by a rehearsal reading of the text performed by professional actors.

Dr. Marco Sonzogni (Reader in Translation Studies, Victoria University of Wellington, New Zealand), “Call a Friend”: Translational Exchanges Between Praz and Montale: Dr. Sonzogni will give an overview of the prolific correspondence between Praz and Montale on the theme of literary translation. Marco Sonzogni, with his extensive background on translational studies, will show how much the relationship between the two renowned authors influenced their translations mostly from English into Italian.

Associate Professor Maria Serena Sapegno (La Sapienza University, Rome), Daughters and Father in the Western Civilization: A Comparative Study: Professor Sapegno, will show how comparative literature can be apply to gender studies by focusing her attention on the study of the relationship between daughters and fathers in contemporary western culture.


16.30-17.30
Key Note speaker: Full-Professor Piero Boitani (La Sapienza University, Rome)
Romantic Agony and The House of Life: Piero Boitani, as a Praz’s scholar, ideally represents the continuity of Praz’s approach to literature throughout the years. As the title of his presentation suggests, he will focus his attention on the two most famous Praz’s works: The Romantic Agony and The House of Life, the biography that Praz wrote in in 1964. 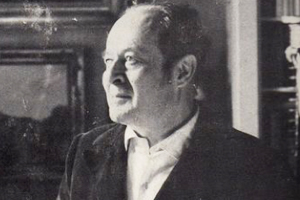