The Trinity Long Room Hub in association with the Herzog Centre Trinity and Holocaust Education Trust Ireland (HETI) are pleased to present
A Holocaust Testimony – A Childhood Under Nazi Occupation.

Monika Sears, a Holocaust survivor will recount her early life as a Jewish child on the run with her mother in Nazi occupied Poland. Afterwards, she will be joined in conversation by her son, Oliver Sears, a Dublin based London born art dealer and Trustee of HETI. The conversation will be moderated by Alison Deegan Barry.

When the Nazis invade Poland in 1939, Pawel Rozenfeld, a young Jewish factory owner is arrested by the Gestapo and disappears. Pawel’s wife, Edyta takes their only child, the infant Monika from their home town in Lodz to look for him in Warsaw. So begins an extraordinary story of survival under Nazi occupation including two stints in the Warsaw ghetto, being thrown from a moving train destined for the gas chambers of Treblinka and the search for a husband and father whose fate was revealed to Monika by her son Oliver only ten years ago.

Monika’s story tells of the pre-war carefree lives of her parents, who couldn’t possibly imagine the horror to come - fake identity cards, gold coins sewn into the lining of coats to buy another few hours of life, and how her mother’s wits and determination dragged them through the war to England and safety. There, Monika began a new life and raised three sons. Only at the age of 51 did she decide to speak about her early childhood and visit Poland for the first time since the war with her youngest son, Oliver. This gave rise to her memoir, ‘From my War, to your Peace, Love Nonna’, written in the form of a letter to her first grandchild. Copies of this book will be available after the event.
*** Please note this event is fully booked*** 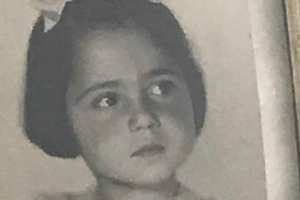