The Return of Children

A Comparative Study of Contemporary Turkish and Irish Novels

This study examines the re-emergence of childhood narratives in the Irish and Turkish literary scenes in the last two decades while observing the transformation of the idea of youth and childhood embedded in the national imaginary in these two countries.

The lecture will be followed by a reception to mark the publication of Dr Gurle’s new children’s book, written in Turkish, Talking to Roko. Inspired by the Platonic dialogues, Talking to Roko looks for answers to the questions of children with a flair for philosophy while telling the story of an unlikely friendship. Professor Pádraic Whyte, Director of the masters programme in children's literature at the School of English, will give an introduction.

The childhood narratives we encounter in contemporary Irish and Turkish literature tell stories completely different from their twentieth-century counterparts. While occasionally presenting themes typical to the previous century, such as class mobility, provinciality, or a feeling of belatedness stemming from Ireland’s colonial past and Turkey’s inherent Occidentalism, these novels provide the ground for genuine experience and open a new space that is immune to, what Agamben calls, the “museification of the world.” The outcome is that, in these novels, the notion of maturity, the ultimate telos of the traditional Bildungsroman, is presented as a grown-up fantasy with its ambitious claim of absolute knowledge, unshakable faith in a better future, and insatiable desire to possess the world as a totality. Instead we are offered stories, where childhood is portrayed not as a transitional period but as an ultimate state, in which the characters live in constant self-experimentation (or “play”) and are governed by a desire to resist the development into adulthood, which would mean a descent into the banality of everyday life.

What is common to all these narratives is that, though presented in various ways, the contemporary self is portrayed as a puer aeternus (the eternal child) who is defined by his resistance to the process of self-cultivation. However, the puer is no longer regarded as a pathology that needs to be cured. His unwillingness to make a commitment, lack of faith in the ideology of progress, and messianic idealism are not viewed as disagreeable qualities. Instead, he is represented as someone who is capable of reviving the past, resisting the destruction of experience, and, first and foremost, creating a rupture in the established temporal and social continuum to open the way for new possibilities. The representation of childhood as a liberating ground is especially relevant in the case of Turkey and Ireland as cultures “infantilized” during the nation-building processes. The contemporary self in the Irish and Turkish novel, represented as a puer, opens up a space of liberation also for the national identity of the two countries, as it suggests giving up on the idea of a traumatized past or a perfected future and embracing the uncertainty of the present.

About Dr Meltem Gurle
Meltem Gürle is a literary scholar from Istanbul and has been based in Trinity College Dublin’s Arts and Humanities Research Institute on a Marie Skłodowska-Curie COFUND Fellowship since October 2018.

With advanced degrees in both philosophy and literature, Dr Meltem Gürle is a comparatist whose focus is on the genre of the “world text” and on non-western modernisms, with a particular interest in the relationship of post-1950 twentieth-century Turkish literature to the modernist masterpieces of the West in the volatile context of recent Turkish political history.  Her research areas also include nineteenth century German philosophy, theories of the novel, the Bildungsroman, and the work of James Joyce. She is a Marie Skłodowska-Curie COFUND Fellow at The Trinity Long Room Hub, and is presently working on her research project with the title, “The return of children: A comparative study of contemporary Turkish and Irish novel.”

Her monograph on Tutunamayanlar (The Disconnected), one of the iconic novels of contemporary Turkish literature, was published in 2016. She is also the author of Kırmızı Kazak (The Red Sweater) a collection of essays on literature and everyday life. Her children’s book Roko ile Konuşmalar (Talking to Roko) appeared in April 2018.

Meltem Gürle writes a literary column for the Turkish daily BirGün.
Read more here
About Professor Padraic Whyte
Pádraic is associate professor of English and a director of the master’s programme in children's literature at the School of English. He began his academic career as a lecturer in Drama, before reading for a PhD in English literature and film studies at TCD. Following the completion of his PhD he worked as a research fellow at the Children’s Research Centre (TCD) on a project on masculinities, fatherhood, and sexual responsibility. He was awarded a postdoctoral research fellowship at the Institute of Irish Studies, Queen’s University Belfast and he also spent a period working in story development and script editing for a television production company, before taking up his current post at the School of English.
He is author of Irish Childhoods (Cambridge Scholars, 2011) and co-editor of Children’s Literature Collections: Approaches to Research (Palgrave, 2017) and Children's Literature and New York City (Routledge, 2014). Read more here

Parents of Turkish speaking children aged 7 to 10  are invited into a very special reading followed by a fun workshop with Meltem in the Trinity Long Room Hub on Tuesday, 5 June 2018 between 17:30 and 18:30. More details here
Register here 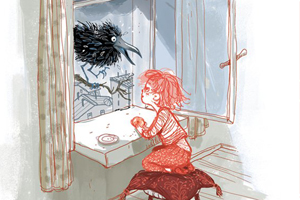