On 26 January 2018, the Polish parliament approved a bill that has soon become a source of major international controversy. The bill, which came into force on 1 March 2018, stipulates that statements ascribing “responsibility or co-responsibility for crimes committed by the German Third Reich to the Polish nation or state” are “contrary to the facts” and punishable with three years’ imprisonment. The new law has led, among others, to a big strain in Polish-Israeli relations. The Polish government, who introduced the bill as a way to ‘eliminate a discourse about “Polish death camps”’ (The Guardian) during the Second World War and to challenge the narrative about the Poles’ complicity in the crimes committed against the Jews during the Holocaust, found itself facing international condemnation for the bill viewed by many as an attempt to censor the historical truth (wybielanie historii – “the whitewashing of history”), if not an expression of anti-Semitism itself. Among many balanced voices considering the complex issue of Polish-Jewish relations and history (e.g. Jacob Mikanowski’s ‘Lessons on the Holocaust, From Warsaw’s No. 35 Tram’ in The New York Times), emotions were seen to play part in the accusatory, often hateful, tone of the responses on social media by the representatives of the Polish and Israeli governments as well as the Jewish diaspora, making this complex issue difficult to evaluate for external observers. Indeed, to objectively understand these developments, it is important to consider a number of factors, including the recent governmental change in Poland which fuels a shift in the politics of memory, from the ‘narrative of guilt’ to a nationalistic discourse of pride, as well as the situation of Poland during the Second World War, which, 70 years on, becomes more and more obscure for the younger generations.

Through this symposium, we would like to engage with a number of issues arising from the debates about the introduction of the bill—and indeed the responses to the bill and perception of Poland—from the point of view of Polish-Jewish Studies research.

Presentations by the invited speakers engage, each in its own way, with the questions of the Holocaust and memory of the Holocaust; Jewish identities in Poland, as well as complex processes of representation, re-creation and/or reinvention of Jewish culture and heritage.

♦ Dr Joanna Rzepa investigates a politics of memory inscribed in the practices of translation of texts addressing Polish-Jewish relations, arguing for a complex transaction whereby the actors in the translation process both re-activate narratives of memory and national identity and are shaped by them.

♦ Dr Aneta Stępień surveys recent developments in the Polish literary field and its treatment of Polish-Jewish relations; with the newly erected POLIN museum serving as an important encapsulation of the paradigm shift towards what she calls ‘re-judaizing Polish (literary) landscape’.

♦ Dr Radek Przedpełski shows how the contemporary avant-garde Polish-Jewish music flees the facile benchmarks of identity, transmuting memory into compositions of affects and expressive materials, making an untimely connection with the mystical Hassidism.

Rather than proposing a unitary conception of what Polish-Jewish Studies should be, we would like to show its potential for changing the static parameters of identities and affirming a multiplicity of different methodologies, agencies, research methods and cultural media analysed. Rather than providing explicit responses to the IPN bill, we would like to show how we strive to counter dogmatic thought through undertaking case studies whose irreducible specificity and logic of desire at the same time maps the complex social and political forces of its milieu. The ensuing politics of artistic and cultural mediation is flush with the social field, diagnosing its problems such as: the relation of memory and creative speculation; focus on the future while not losing sight of the past.?

11.50-12.30  paper 3: Dr Radek Przedpełski
Ecologies of an Untimely Hassidism. The Avant-Garde Music of Raphael Rogiński as a Tsukunft of Polish-Jewish Art 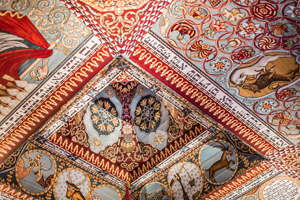