CANCELLED - Unfortunately This lecture is no longer going ahead. Apologies for any inconvenience caused.

Since Hesiod, Plato and Lucian the myth of Prometheus, the God of poets and philosophers, kept silent in prose for almost 2.000 years. Then Kafka retells the story in some of his late prose sketches. For him, the antique titan is a tiresome anti-hero, a rebel without a cause, a guiltless perpetrator. His promethean characters are handicapped technicians in the spare parts storages of classic myths.

About Professor Micheal Braun
This talk examines Kafka’s technological visions around one of the most ambivalent heroes of mythology. Following Hans Blumenberg’s Arbeit am Mythos, Kafka, by reading his sources, creates sources for new readings (followed up by Peter Handke, Sarah Kirsch, Heiner Müller). Prometheus represents a complex narrative beyond mechanism and mythology, beyond creation and bricolage. In Kafka’s reading Prometheus seems to be “entfrevelt” (Blumenberg): The robbery of divine fire is less important now. The narrative to be told is the re-invention of man in the machine age, the revolution of modern arts, and the transformational changes in modern writing.

Michael Braun is Professor for Modern German Literature at the Universität zu Köln and, since 1992, Head of the Section ‘Literature’ at the Konrad Adenauer Foundation. He studied German Literature, Catholic Theology, Political Science and Pedagogics at the Universities of Aachen and Bonn. Dr. phil. Aachen 1993, Habilitation Köln 2000. Since 2008 he is the convener of a research network of European Germanists from 26 countries. Prof. Braun has published many books and articles on contemporary German literature, film and culture, for example on humour in film (ed. 2018), on religious trends in contemporary literature (2017), on Prometheus in film (2016), on the First World War in European culture (co-editor 2016) and an introduction to Contemporary German Literature (2012). 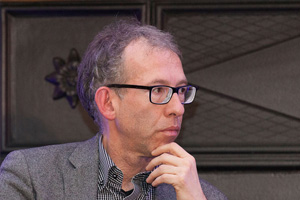