With a Brother’s Arms

‘With a brother’s arms’: An Evening with Bernard O’Donoghue

The School of English, TCD, presents 'With a brother's arms': An Evening with Bernard O'Donoghue, a special event to celebrate Bernard O'Donoghue's residency as a Visiting Research Fellow in the Trinity Long Room Hub.

Bernard O'Donoghue will read from his poetry, before an interview with Martin Dyar, which will explore the concerns of and intersections between the various strands of O'Donoghue's acclaimed work in literature: as a poet, a translator, a critic, and an editor.

Event is free but registration is required
About Bernard
Bernard O'Donoghue was born in Cullen, Co Cork in 1945, and he still spends part of the year there. He moved to Manchester in 1962; since 1965 he has lived in Oxford where he is now an Emeritus Fellow in English at Wadham College. He has published seven books of poems, of which the most recent is The Seasons of Cullen Church (Faber, 2016), which was shortlisted for the T. S. Eliot Prize. He has published a verse translation of Sir Gawain and the Green Knight (Penguin Classics, 2006), and is currently translating Piers Plowman for Faber. His work as a critic and editor includes Seamus Heaney and the Language of Poetry (1994) and The Cambridge Companion to Seamus Heaney (2009). In April 2018 he will be a Visiting Research Fellow in the Trinity Long Room Hub.


About Martin
Martin Dyar’s debut poetry collection Maiden Names (Arlen House) was shortlisted for the 2014 Pigott Poetry Prize. He won the Patrick Kavanagh Award in 2009, and the Strokestown International Poetry Award in 2001. A graduate of TCD, where he did a PhD in English Literature, and taught for ten years in the School of Medicine, he has held writing fellowships at the University of Iowa, and at the Washington Ireland Program. His work has also been added to the Leaving Cert prescribed poetry syllabus. He holds the 2018 Arts Council writer-in-residence fellowship at the University of Limerick. A new song cycle, Buaine Na Gaoithe, written with the composer Ryan Molloy, will have its first Irish performances in October of this year. 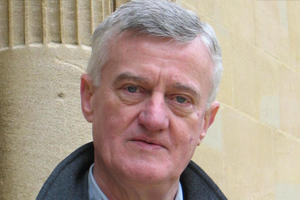