The Trinity Long Room Hub artist in residence Dan Hoyle in association with Trinity’s Creative Arts Practice research theme will give a very special performance in the Samuel Beckett Theatre of his acclaimed solo show ‘The Real Americans’, inspired from his journey through small towns and rural areas of the United States.

Registration and a small fee is required to cover the costs of this production. Book your ticket here

"You’ll discover yourself struggling to find ways to accurately describe the emotional depth and intellectual breadth of what you have just witnessed."
— Huffington Post
"Impressive, hilarious, moving and provocative. Beneath the masterful humor, a rich texture of human connections asserts itself"
— San Francisco Chronicle
“Dan Hoyle’s smart, entertaining, funny, insightful, and surprising show...is compassionate and ultimately hopeful, without being soft at all.”
— The New Yorker
Read the Review: ‘The Real Americans’ at Mosaic Theater Company

About Dan Hoyle
Dan is an award winning actor and writer based in the US. His brand of journalistic theatre has been hailed as "riveting, funny and poignant" (New York Times) and "hilarious, moving and very necessary" (Salon).

His solo shows - EACH AND EVERY THING, THE REAL AMERICANS, TINGS DEY HAPPEN, FLORIDA 2004: THE BIG BUMMER, and CIRCUMNAVIGATOR - have toured the US and overseas.

Dan has been recognized with many awards, including the Will Glickman, Prize of Hope, Bay Area Theatre Critics Circle, TBA, and Lucille Lortel (Nomination), been supported by grants from the Edgerton Foundation, the Pew Theatre Initiative, the Fleishhacker Foundation, the Zellerbach Foundation, and been commissioned by Aurora Theatre, First Person Arts, and San Francisco Playhouse and The Working Theatre.

Dan holds a double degree in Performance Studies and History from Northwestern University and was a Fulbright Scholar in Nigeria in 2005-2006. He has performed and led workshops at many universities including Columbia, Stanford, and NYU.

Dan will also participate in a Fellow in Focus on the 23rd April at 13:00 details here 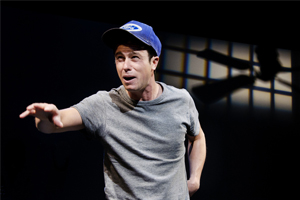