War and Revolution: Framing 100 years of Cultural Opposition in Ukraine

The last century of Ukrainian history has been shaped by war, revolution and the struggle for statehood. The Russian Revolution of 1917 swept away the Romanov dynasty, unleashing five years of social upheaval in the southwestern borderlands. The Euromaidan Revolution of 2014 precipitated Russia’s annexation of Crimea and the outbreak of war in the Donbass. The decades in between saw civil war, famine, the Stalinist purges, mass repression and surveillance, as well as attempts by Soviet Ukrainians to reform and humanise socialism from within.

Through striking works produced by several generations of writers and artists, this Exhibition on one hundred years of cultural opposition in Ukraine will provide visitors with a deeper understanding of Ukraine’s complex historical legacies, as well as various modes of cultural resistance. Featuring prominently will be reproductions of paintings, graphics, photographs, and texts produced by individuals, who fought for greater cultural and political autonomy for Ukraine within the Soviet system. The Exhibition ties struggles of the Soviet era to current events by showing images of human rights activists and political prisoners, many of whom served lengthy sentences in strict regime hard labour camps in Siberia in the 1960s and 1970s, participating in the protests of 2014. To give visual representation to the human costs of war and revolution, the Exhibition displays works by photographers Joseph Sywenkyj—a recent recipient of the prestigious W. Eugene Smith Grant in Humanistic Photography—and Anatolii Stepanov, who has spent the last four years photographing on the frontlines of the war in the Donbass.

EXHIBITION LAUNCH
The exhibition will open on Wednesday, April 11th at 18:00 for viewing before the panel discussion at 18:30 with Joseph Sywenkyj, Gillian Wylie and Orysia Kulick, all of whom will reflect on the themes of the exhibition.

Register here for this event
PANELLISTS
Dr Orysia Kulick is the curator of the Exhibition and has drawn her material from research undertaken as part of the Horizon 2020 COURAGE Project. Orysia will situate the exhibition in a broader historical perspective, discussing the impact of war and revolution on Ukraine as a polity over the last century and the various forms of resistance that multi-generational struggle has engendered.

Dr Gillian Wylie, Assistant Professor of International Peace Studies in the Confederal School for Religions, Peace Studies and Theology, will show how gender analysis of these images enables us to bear witness to the bodily realities of war, ranging from pictures which capture the rigid gender binaries so crucial to mobilizing war to disruptive images of women’s agency and wounded men.

Joseph Sywenkyj will draw on his twenty years of experience as a photojournalist in the Democratic Republic of Congo, Kyrgyzstan, Georgia, Iraq and Ukraine, focusing on the human costs of war.

Joseph will also speak in greater depth about his perspectives on humanistic documentary photography in a special lunchtime ‘Photographer in Focus’ discussion, which will take place on Thursday, April 12th at 13:00 in the Hoey Ideas Space. He will show photos from the Maidan and the Wounds project and also discuss potential applications of VR technology in portraying the physical, psychological and emotional trauma of war on soldiers and their families.

The Exhibition was organized as part of the Horizon2020 funded project COURAGE, which focuses on cultural opposition to communism in Eastern Europe, with generous support from the Trinity Long Room Hub’s Research Incentive Scheme
Image used is © Joseph Sywenkyj 2014 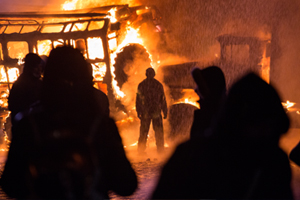