Professor Rob Savage (Boston College) joined us in January as a Visiting Research Fellow (in collaboration with the School of Histories and Humanities). He is currently writing a book about censorship and the Northern Irish ‘Troubles’ and will speak about how censorship of the broadcast media was pervasive throughout the island of Ireland in the 20th century.

Rob Savage is Professor of History at Boston College where he teaches Irish, British and European History. He has written four books including The BBC’s Irish Troubles: Television, Conflict and Northern Ireland which was recently short-listed for the 2018 Christopher Ewart-Biggs Literary Award; A Loss of Innocence? Television and Irish Society 1960-1972, which won the 2011 Donnelly Prize for best book in History and the Social Sciences from the American Conference for Irish Studies; Sean Lemass: a biography; and Irish Television: the Political and Social Origins.

Professor Savage served as a director of the Boston College Irish Studies Program from 1995 to 2010. He has been awarded Visiting Fellowships at the University of Edinburgh where he held a Leverhulme Professorship; the Moore Institute at the National University of Ireland, Galway and Queen’s University, Belfast. He was a Visiting Fellow at the Long Room Hub in 2012 and has returned under the Trinity Visiting Academic Program in January. 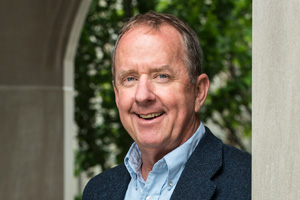