Plato's Parmenides in Relation to Plato's other Dialogues

2:30pm–4pm
David Horan (Trinity Plato Centre)
'The One in Plato: Parmenides and Sophist'

4:30pm–6pm
Vasilis Politis (Trinity College Dublin)
'How, and in what dialogue, does Plato argue for the Parmenides claim that forms are necessary for thought and speech?'
Sunday 25 March 2018
10:30am–12pm - Pauline Sabrier (Sun Yat-Sen University, China)
'Can forms have parts and nevertheless remain one? A comparison between the Sophist and the Parmenides'
12pm–1:30pm
Lunch 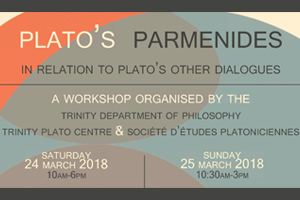