The Invisible Shining: The Cult of Mátyás Rákosi in Stalinist Hungary, 1945-1956 - Book Launch

The Invisible Shining: The Cult of Mátyás Rákosi in Stalinist Hungary, 1945-1956 by Balázs Apor (Director of the Center for European Studies, TCD) will be launched by Professor Judith Devlin from the School of History at UCD.

The book presents a comprehensive discussion of the construction, reception and eventual decline of the Stalinist leader cult in communist Hungary, focusing primarily on the Party Secretary, Mátyás Rákosi. The book advances the argument that the “cult of personality” was not just a curious aspect of communist dictatorship, but it remained a crucial component of communist rule.

By focusing on the main methods and institutions of cult construction, the book explores how the Stalinist leader cult was created, how the population responded to it, and how it was eventually dismantled.

Balázs Apor is assistant professor in European Studies in the Department of Russian and Slavonic Studies and is currently director of the Centre for European Studies at Trinity College Dublin. Dr Apor is a historian of post-war Central and Eastern Europe, with a special focus on Communist Hungary. His research interests include the study of propaganda and symbolic politics under Communist rule, and the Sovietisation of Eastern Europe after the World War II. He has a particular interest in the study of leader cults, the invention and dissemination of socialist myths and the functioning of rituals in Soviet-type societies. He has also studied social attitudes towards Communist rule, most importantly dissent and popular indifference. Apart from his newly published monograph The Invisible Shining: The Cult of Mátyás Rákosi in Stalinist Hungary, 1945-1956 he has co-edited two volumes on those subjects: The Leader Cult in Communist Dictatorships: Stalin and the Eastern Bloc (Basingstoke: Palgrave, 2004), and The Sovietization of Eastern Europe: New Perspectives on the Postwar Period (Washington, DC, New Academia Publishing, 2008).

Please register for this event here 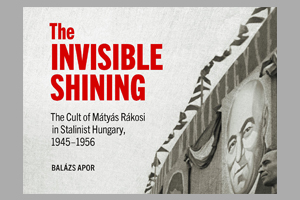