This seminar will focus on the novel Spill Simmer Falter Wither by Sara Baume and its translation into Czech by Alice Hyrmanova McElveen. Organised by Embassy of the Czech Republic in Ireland
School of English (TCD) Centre for Literary and Cultural Translation (TCD)

Sara Baume studied Fine Art in Dun Laoghaire College of Art and Design  before completing  her Masters in Creative Writing in Trinity College, Dublin.
In 2014 she won the Davy Byrnes Award for her short story Solesearcher1.
Her first novel Spill Simmer Falter Wither (Tramp Press, 2015) received great critical acclaim and won several awards, including the Rooney Prize for Irish Literature 2015, and was the readers’ nomination for the Guardian First Book Award in the same year. It has been translated into several languages and a Czech stage adaptation is currently running in Prague.
Her second novel  A Line Made by Walking (Tramp Press, 2017) was shortlisted for the Goldsmith Prize for fiction "that opens up new possibilities for the novel form". It has a somewhat autobiographical flavour, as it portraits a young woman artists going through a quarter-life crisis and contains the author’s own photographs.
She lives in West Cork, striving to ballance her writing with her art, preparing an exhibition at present, as well as working on her third book.

Alice Hyrmanová McElveen graduated in English and Czech Studies from Charles University, Prague, and has been living in Ireland since 1988. She has devoted her professional life to literary translation, focusing mainly on contemporary Irish literature during the past decade.
Her recent translations include works by Claire Keegan (Walk the Blue Fields, Foster), Gerard Donovan (Country of the Grand), Kevin Maher (The Fields), Donal Ryan (The Spinning Heart, The Thing About December, All We Shall Know).
In 2014 she received Creative Achievement Award from Czech Literary Translators’ Guild for her translation of The Fields by Kevin Maher.
Her most recent translation, of  Sara Baume’s novel Spill Simmer Falter Wither,  won the Translation of the Year award in the most prestigious book competition in the Czech Republic (Magnesia Litera 2017).
She lives in rural Co Wexford and is now translating Sara’s second book,  A Line Made by Walking. 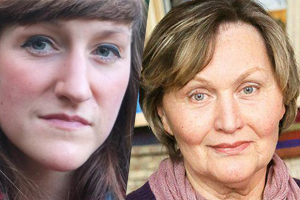