Thomas Mann’s novel Doktor Faustus (begun 1943, published 1947) tells the story of Adrian Leverkühn, a German composer who sells his soul to the devil in return for a full flowering of his musical genius during the twenty-four years left him on earth. Leverkühn’s ‘biography’, narrated by his devoted humanist friend Serenus Zeitblom just as the Hitler regime is entering its terminal phase, is usually approached as Mann’s monumental literary response to the calamity of German National Socialism.
My paper—taking its cue in part from Frances Lee’s audaciously contrarian reading in Overturning ‘Dr. Faustus’ (2007)—argues that something else entirely may be going on in Mann’s text. In order to tease out this ‘something else’, I explore the key behind-the-scenes role which the formidable Marxian theorist and cultural critic Theodor Wiesengrund Adorno famously played in the novel’s evolution. Doktor Faustus’s sponsoring dialectical tension, I argue, is not that between a demonically inspired fascism and a liberal-humanist or socialist anti-fascism, but that between individualism and collectivism. Kierkegaard vs. Marx: the great political, aesthetic and spiritual contention staged in Mann’s novel.

Dr. Daragh Downes is a Teaching Fellow in the Dept. of Germanic Studies at TCD.  His doctoral thesis, “The Fear and Trembling of Malte Laurids Brigge”, explored parapsychological and mystical themes in a number of key European texts around the fin de siècle. 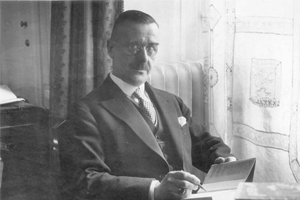