Genocide and Ethnic Cleansing in our Times: From Rwanda to the Rohingyas

Following the Bosnian and Rwandan genocides of the 1990s, the international community vowed, as it did in 1945 after the Holocaust, ‘never again’. Yet further conflicts, mass killings and displacements have prompted us to question why intervention takes so long, and how we can stop and prevent genocide and ethnic cleansing in our times.

Bringing together a distinguished panel of international speakers and practitioners in the area, the Trinity Long Room Hub’s Behind the Headlines discussion will look at the historical context to genocide and ethnic cleansing and its meaning; the different views of the international community in relation to prosecution and responding to cases of genocide; the geo-political dimension and UN system failure and reform; and case studies including present day Myanmar.

Register for this event here
Speakers:
Professor Ben Kiernan is the Whitney Griswold Professor of History at Yale University, and author of Blood and Soil: A World History of Genocide and Extermination from Sparta to Darfur. Currently a visiting fellow at the Trinity Long Room Hub, Professor Kiernan will provide a historical context to the concept of genocide and its meaning, including historical examples of genocide and ethnic cleansing.

Dr Jude Lal Fernando is Assistant Professor in Intercultural Theology and Interreligious Studies at the Irish School of Ecumenics, Trinity College Dublin and will look at the geo-political fault lines which impede international cooperation and speedy responses to cases of genocide and ethnic cleansing. He will also discuss the United Nations’ role and what has been referred to as ‘UN system failure.’

Mr Denis Halliday is a former United Nations Assistant Secretary- General and was the United Nations Humanitarian Coordinator in Iraq from 1 September 1997 until 1998. Denis will provide his front-line experience of genocidal action. He will look at the United Nations Security Council, its five veto powers and argue that without change and reform, the UN will continue to fail all those at risk of genocide. 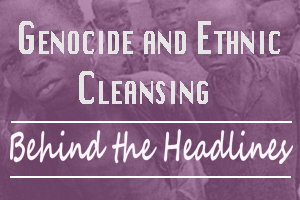